Where is my friends? 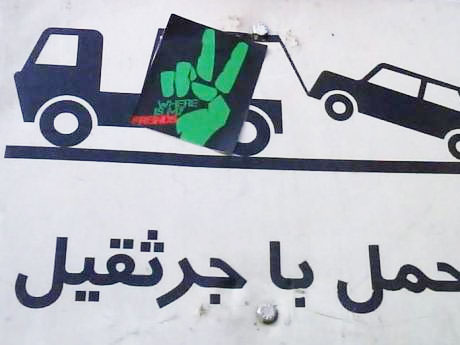 With tens of people still unaccounted for after the recent unrest in Tehran and with the ongoing arrests made in recent weeks, Iranians’ silent protest to the regime are finding new dimensions.  Civil disobedience is gaining momentum, with more and more Iranians thinking of clever and anonymous ways to protest the heightened brutality and fascism with which IRI is facing the peaceful citizens of Iran.  Over the coming days, I will be showing you ways in which people are doing this civil disobedience.  For now I would like to share with a sign that was spotted in the Sadeghieh (Aryashahr) neighborhood of Tehran today.  Where the slogan previously said “Where is my vote?” it has been changed to say “Where is my friends?”  I hope you can see the words well in this picture.  Source is unknown.