So, can you take some criticism? 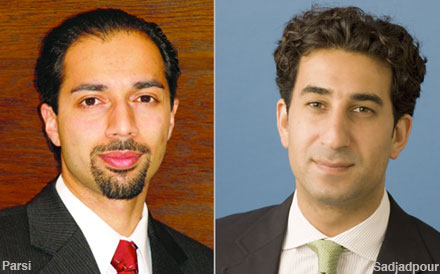 As an Iranian-American youth, seeing the courage of our cousins back in Iran has blown my mind. Suddenly, I didn’t want to hide my identity, I wanted to scream to everyone at my university that I was Iranian and that the immortal protestors they saw on TV were my brothers and sisters.

And as a polisci and communications major, it was also very cool to see Iranian American experts – not a decade older myself – on the air, explaining to Joe the Plumber and his Neanderthal clan as well as the more enlightened population in my beloved America the run down in Iran.

Two of them are Trita Parsi and Karim Sadjadpour. I had never seen them on the same stage before, so it was pretty cool that they both were on PBS Newshour a few weeks ago. () It was an awesome opportunity to compare their styles and analysis. I am a fan of both of them, so if they read this, I hope they don’t take this the wrong.

Let’s start with style and appearance. Both of them are well shaved and seem to wear an appropriate portion (Persian standards) of hair gel. And one can almost smell that neither of them is using cologne responsibly, in true Iranian fashion. That’s all good, but what kinda tie is Parsi wearing? He has a dark shirt, and an even darker tie! Did you look at yourself in the mirror before you went on? Lord have mercy.

And if you wear these dark colors, at least try to smile, baradar! Throughout the interview Parsi is locking his gaze on poor Jim Lehrer, looking as if he may jump out of his chair and strangle the poor old guy at any given moment. Like many Iranians, Parsi can’t seem to focus without looking pissed. And the word smile seems as alien to him as the word modesty is to Kanye.

But the brighter side of Parsi’s stern, angry gaze is that he looks self-confident. He answers the questions without pause while still maintaining an engaging rhythm.

Sadjadpour, however, is very well dressed, has a nice yellow tie and matching plucked eyebrows. You can see he is a guy that has a not-so-secret love affair with the mirror. That is a plus. But he needs to work on his confidence. He looks at Jim Lehrer with George Bush’s deer-in-the-headlight look, confused as to why he is being asked questions in an interview. He has that scared boy look, you know the one when you were ten and you had gotten yourself into fatal trouble and you looked at your father’s angry frown, trying to figure out what he wanted you to say to your defense.

And he better, because his analysis seems lacking. And he seems to know it. When he wasn’t seeking Jim Lehrer’s approval, he was looking nervously at Parsi as if he needed his endorsement to continue the interview.

The camera doesn’t show Parsi looking at Sadjadpour at all – or even acknowledging his existence. And this is where Parsi’s confidence may become a handicap. While Sadjadpour comes across as submissive, Parsi seems inappropriately indifferent. In one segment, he even cuts of Jim Lehrer to make his point. Buddy, I don’t care how brilliant you are, you simply don’t cut of Jim Lehrer! If you hadn’t noticed, the program you were on is named after him! Get the hint?

Ok, on to their analyses of the situation in Iran. Sadjadpour refers to the protests on the anniversary of the student uprising as a celebration. Not sure what he had in mind, but the clashes on the streets of Tehran is not on par with the Carnival in Rio. It’s on par with Israel’s massacre in Nablus. So calling it a celebration seems somewhat off. But most importantly, Sadjadpour misses the opportunity to open the discussion with a great point. All he says is that the Iranian people is great and courageous. True, but we didn’t need you to tell us that, genius. Use your 15 minutes of fame to say something slightly intelligent.

Parsi comes to his aid and reels in the point: The protests in Iran have not ended, in spite of the brutality of the repression. Good – America needed to be reminded of this so it wouldn’t think it’s business as usual. (Too bad he looked as if was about to kill Lehrer while giving the answer.)

Sadjadpour then goes over to argue that the US should not talk to Iran prematurely since that would demoralize the opposition. Another good point. But why on earth would Billy Bob Neanderthal in West Virginia care about the Iranian oppositions and their state of emotions? It would have been better to explain why this would be bad for Billy Bob and his unemployment benefit.

But then Parsi commits a lethal mistake. He takes a dump on Michael Jackson and the media coverage Wacko Jacko had gotten at the expense of the Iranian protesters. Now he may be entirely right, but who cares? Parsi just lost not only Billy Bob Neanderthal and his village of incest produce, but every American that ever owned a record player as well. Not smart.

But the biggest no-no of the evening is Sadjadpour’s. When asked about the Iranian opposition, Sadjadpour answers by quoting himself! Yes, you heard me right. He quoted himself. Look Sadjadpour, if you read this, take heed at these words of wisdom. Quoting oneself is something that you can only get away with if you are an elite athlete or artist and everyone knows that you have the combined IQ of a chipmunk and a donkey. Leave it to boxers and bling bling rappers. But if you are playing an analyst on TV, you should quote others, not yourself. Otherwise you might be demoted from PBS to ESPN.

Having said all of this, I couldn’t be prouder to be Iranian today. I hope neither Sadjadpour, Parsi, Joe the Plumber, Neanderthal village, Billy Bob or anyone else got offended. Remember, the critic is your best friend. Or something like that.