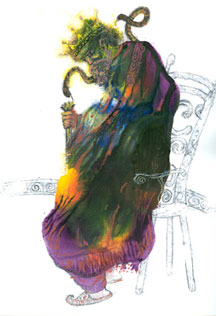 Skeptipedia Iranica describes Fereydoonism as the expatriate urge to commandeer an uprising once it has already been started in his country of birth. Characteristic of this condition is the false sense in the expatriate that he/she represents the authentic native, having escaped the cumulative cultural and political mutations affecting those who stayed behind.

The nomenclature has its origin in the story of Fereydoon and Zahak. Still unborn, Fereydoon was being hunted by Zahak, the Arab usurper of the Iranian throne. Zahak started the chase after he had a dream that someone named Fereydoon was going to bash his head in with a cow-headed mace, then flay him head to foot and chain him to Mount Damavand.

For someone with such precise psychic vision, this was a disappointingly inefficient premonition. What Zahak should have dreamt was that a local blacksmith named Kaveh was going to start a rebellion against him, after which a young man named Fereydoon would take over the rebellion, bash his head in with a cow-headed mace, flay him and chain him to Damavand. Since Kaveh the blacksmith was already born, he would have been easier to find and kill, averting the unfortunate chain of events.

By the time Fereydoon was born, everyone knew that Zahak was looking for him, so

Fereydoon’s mother, the noblewoman Faranak, escaped to a far away meadow where the child would be suckled by an extraordinary cow, Pormayeh (or Barmayeh). Ferdowsi says in his Shahnameh that each hair on this splendid cow was a different color. With this information we can actually determine the size of this super cow. Since the human eye can see about 10 million colors, and assuming a reasonable density for cow hair, this cow comes out to be about 4 feet long. A really big goat maybe, but an uber-cow? This gives a quantitative measure of the exaggeration factor of the myth.

Meanwhile Kaveh the blacksmith was losing son after son to Zahak. The snakes growing out of Zahak’s shoulders (long story) would eat nothing but human brain, so a lot of young Iranians were losing their lives to the regime. Two Iranians named Armayel and Garmayel deserve to share a Nobel Peace Prize for their deeds, because they figured out a way to mix lamb brain with the snake food, saving many Iranians.

Ferdowsi says the men who were saved were smuggled out to the wilderness and given flocks of goats to sustain them. These later became the nomadic Kords. Skeptipedia Iranica conjectures that Armayel and Garmayel were Kords to begin with, and that ethnic favoritism was at work here (This kind of favoritism plagued the country until last month’s elections where Kords, Lors, Azeris, Baluchis, Arabs, Gilakis, Mazanderanis, and Turkamans, with unprecedented fair-mindedness voted overwhelmingly against their own candidates).

Fereydoon was really angry, of course. Not about the brain business, which—being an expatriate—he knew nothing about. He was mad because mom had told him about how Zahak killed his father and took away their property. Also, the pet cow (goat?), Pormayeh had to be avenged. In his mad search for Fereydoon Zahak had shown no mercy to the cow.

The young man was about to sweep down on his homeland in a storm of vengeance, but Faranak, who didn’t want to lose a son, held him back, reminding him that he had no followers, while Zahak had a big army. The task of finding followers and starting a rebellion would fall to the blacksmith Kaveh who was down to his last son.

Fed up with the injustice, Kaveh took off his leather apron and stuck it on a spear, improvising a flag. Then he went around the country with his new flag—which has come to be known as Derafsh e Kaviani–making speeches and gathering an army in Fereydoon’s name. Fereyedoon later took over this army, bashed Zahak’s head in with a cow-headed mace, flayed him head to foot and chained him to mountain Damavand. Iran was free again.

Afterwards Fereydoon did something Zahak had not seen in his dream: he told Kaveh and his followers to go home.

So we brave expatriates must stay at the ready. Kaveh is gathering support in our names. Soon he will come to put at our disposal a large army of followers. Our properties will be returned, our 48 inch cow avenged.

And Kaveh will go home, leaving us in charge of Iran.