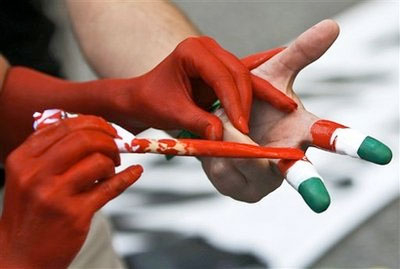 The world patiently waited for the Iranian election in hopes to see a change of sort towards moderation and semblance of sanity.  Only to see their votes adulterated, their hopes vanished; frustration and anger renewed.  As the events unfolded before us, we witnessed the extent and severity of the pain inflicted on Iranian people.  We share that pain and feel obliged to stand  by our Countrymen however we can.  This Article is dedicated to those who had the courage to walk the streets with a green sign of defiance.

At this stage , we find Iran in the state of a multi-dimensional cubical that could land on any side, and perhaps on the side that bears the center of gravity.  At the top of this cubical is the ruling clerics.  I see this group as uneducated, lacking touch with current civilization, and their progress has been from 7th Century to 15th Century Europe, the age of the Spanish Inquisition.  The Europeans of that era tortured by hanging people from the ceiling and used the rack to get confession of their sins and they subsequently were burned at the stake.  Islamic Republic tortures people in similar fashion then cuts their limbs, mass executions by firing squad, or commit public stoning. These barbaric executions under religious pretence of sharia laws have on one hand brought the Iranian people to the boiling point and on the other hand has pushed the Islamic Republic to the depth of degeneration and comparison to Islamo-Fascism.  At the same time they have failed the people of Iran economically by fattening their bellies, filling their coffers and hiding it in foreign banks as the Shah and his family did. One must conclude that 30 years Islamic Dictatorship has been far too long and can no longer be tolerated in Iran.  The Islamic Republic must go and no form of Religious government is acceptable.  ” Separation of Church and State” has to be one of the principles of the future Constitution.

Another, but insignificant side of the cubical is the generation of street thugs called the Basij who perform the dirty work for the Islamic Republic. Such as enforcement of infamous hijab and any other actions that are deemed to be Non-Islamic.  The harassments, beatings, taking down satellite dishes, creating fear and other petty misbehaving are infringement on the happiness, peace and tranquility of Iranian people.  Over the years the mullahs have had plenty chances to have won the hearts and the minds of all people by establishing a just government, providing free press, putting value on Arts and Humanities, making hijab voluntary and respecting Freedom of Religion for all.  Instead they brought tyranny worse than that of the Shah’s.  Any future government has no need for these street thugs. They must be banned and disposed of along with their boss the mullahs.

Another side of the cubical is the Military.  It is a combined apparatus of power sharing between many who fought to bring down the Shah, those who rose up to the occasion and took leadership in Iran-Iraq war (the Pasdaran, IRGC), the Military proper (IRIA), The Basij force and lastly the police force to maintain internal order.  The branches consists of Ground Force, Navy, Air Force, and Air Defense Force.  Within this organization exists a successful Ballistic program and up and coming Nuclear program.  We are all well aware of the controversy surrounding the nuclear program.  I am very proud of Iran’s technological advances in variety of sciences.  Iran has the right to produce radioactive fuel for domestic production of energy.  And I hope Iran is not up to no good producing an Atomic Weapon.  That is not going to serve the nation in a positive way.  I believe if Iran succeeds in producing an atomic weapon in violation of the Nuclear Nonproliferation Treaty, that will place a target on Iran’s chest for its eventual destruction by the superpowers and its division as it was done in 1909 by the British and Russians to two economic areas, with British having the rights to the oil resources.  Two matters noteworthy to mention here is that Iran has ratified the ” Chemical Weapons ” convention in 1997.  You know what that did to Iranians when the mad man Saddam Hussein used it on Iran-Iraq War.  Another is that Iran also has ratified the “Biological Weapons” Convention in 1973.  Iran has one of the World’s advanced Genetic Engineering program.  Royan Institute Research Center in Esfahan recently cloned a calf, the first in Middle East.  They had cloned a sheep in 2006, still living.

The signing of the nuclear non-proliferation, ratification of Chemical and Biological Conventions are the type of things that places Iran alongside the other progressive nations.  It guarantees prestige, acceptance and security for all Iranians.  We do not need a nuclear weapons program that threatens our neighbors and places our ultimate security at risk.  The fact that Islamic Republic has been evasive on this issue, and has not come clean with respect to inspection and documentation, etc, it is no surprise all those with relative intelligence believe this government’s ultimate ambition is production of nuclear weapon.  Then getting back to the subject of military, it is believed by General John Abizaid, Chief of United States Central Command in the Region, Iran has the most powerful military in the Middle East, excluding Israel.  So that brings us to our  final analysis. If we were to toss into the air such a multi sided unbalanced block of factors, where is that going to land?  Again we must locate the Center of Gravity of this block.

Erroneously the mullahs thinking this armada of military strength and production of a nuclear weapon is their guarantee to remain in power for ever.  I am of the opinion that the bullet that struck Neda Aga Soltan, her image with blood flowing from her mouth, her eyes fixed on the blue skies, innocently laying on the ground taking her last few gasps of air, is the bullet that entered the chest of the Islamic Republic of Iran.  The World is sitting there in disgust and anger, looking at this government with impunity for its crimes against humanity.  The brave Iranians who have given their lives for individual rights and equality, freedom of Press, and freedom of religion, those who fled Iran to escape political and religious persecution, and the rest of the world who sees this Illegitimate government as a threat to world peace, is a common and powerful force staring the Islamic Republic in the face.  The mullahs have lost their respect and credibility with Iranian people.  There are crucial internal and International elements at work.  This government simply does not have the wisdom to know how to deal with it.  I count them out.

In August of 1994 Pasdaran were dispatched to Gazvin to suppress an uprising.  It turned out to be a nasty affair far beyond what they had expected.  They ended up killing 30 people and wounding 400.  The  incident caused the Revolutionary Guards to take a look at themselves and re-define their roll as who they are and what they should be doing now.  The commander of Pasdaran wrote a letter to Ayatollah Ali Khameini, saying ” The role of the Countries Armed Forces is to defend its borders and to repel foreign enemies from its soil, not to control the internal situation or to strengthen one political faction above other”.  This indicates that Pasdaran considered itself part of military and not a police force.  At least at the time in the heat of the emotion.  Khameini realizing he can no longer count on revolutionary Guards, turned to Basij.  On April 17, 1995 he promoted Hassan Firuzabadi to the rank of full General above both commander of Pasdaran Brigadier General Mohsen Rezai, and Ali Shahbazi Brigadier General of the Armed Forces.  Here we can see a crack on the Islamic Republics shell and separation of interest.  The Pasdaran are looking at bigger and better things for themselves.  This elite force is mixed with the regular military, and in a broader sense owning it.  Their economic, political and the control of military and non-military scientific work, and the intelligence forces the Quds, puts the group above all other forces.  This group certainly carries the most weight but its distribution and balance is in question.

Lastly but not the least is the people of Iran.  The Iranian resilience and guts, its desire for independence, freedom and democracy has been admired worldside by all nations.  It is the envy of the Middle East.  Its socio-economic, political, cultural and religious variance are elements of diversity which complicates its unity towards a common goal.  With four more years of Ahmadinejad, these differences are going to take a back seat to a greater cause, a free Iran that is part of the World community.  The final show down shall be the Pasdaran vs the people of Iran.  Not necessarily a military show down but a political one.  Another subject in itself.

PrevPreviousNewsweek Steps Up Effort to Free Reporter in Iran
NextGod is Dead, Love is Dead; God is Love; Love is a Reusable TamponNext