Neda was no Martyr! 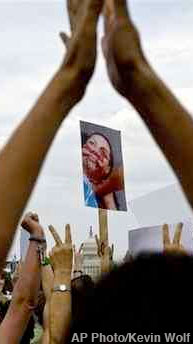 I was flipping channels the other night when I came across an interview with Reza Aslan who was predictably discussing the recent events in Iran. Good for him. The guy knows his shit and he sure has cashed in. During the interview, Aslan displayed his green bracelet with the word, “Neda” written on it and exclaimed that Neda Agha Soltan was the most recognized martyr of the green movement. Wow! I almost fell off my seat.

I then remembered that other organizations have claimed the same thing. We all remember Reza Pahlavi’s emotional leakage in the Press Club when he mentioned Neda’s name while weeping like a little girl and MKO’s leadership who have staked their claim to Neda’s legacy, not to mention leftist groups who claim that her father was a member of a leftist movement in Iran. I even remember my own cousin calling her the martyr of the Iranian freedom. Even the IRI government got in the act and claimed that she was murdered by foreign intelligence services and announced an investigation into her brutal murder.

Neda Agha Soltan became a commodity that just could not be ignored. Her sensational and vivid murder captured on video shocked the world and gave the opposition groups the image of purity and innocence they were longing for. Like vultures, they came for the feast.

Martyr by definition is a person who willingly and freely sacrifices her life for a cause that she passionately believes in. Neda was no martyr. She neither “willingly” nor “freely” scarified her life for the green movement or freedom for Iran or Iranians. Unlike Reza Aslan who is at the right place at the right time, Neda was at a wrong place at a wrong time. Neda did not ask for this. She did not even vote in the election and had no faith in IRI’s ability to reform itself. She regarded Mousavi as another gutless inner circle of the leader who, like his ally and mentor Khatami, will have no profound impact on making the lives of Iranians better. Neda just happened to get the shaft in the wrong end. If she could do it again, I promise you that she would go home with a BIG bilaakh in the air for the green movement, monarchists, leftists, MKO cronies and the makers of that stupid bracelet. The interesting part is that even the greenies didn’t at first acknowledge her as a martyr. They knew that she was not dumb enough to think that Mousavi could be a factor in preventing the demise of the Iranian pride and heritage. But the greenies soon realized that Neda was an institution that just will not go away and jumping on the bandwagon was in order.

Acts of brutal murders like Neda and others who lost their lives in recent events, torture and rape of prisoners, kidnapping and government assassinations have been taking place in Iran for the past 30 years during the time when Mousavi, Karoubi and Khatimi had been in power. What amazes me is that the trio acts as if the brutalities and crackdowns are new phenomenon that is unprecedented in Islamic Republic. And what amazes me more are those who still believe in these clowns.

Those who regard Neda as a martyr should be ashamed of themselves. She was too smart to be one you.