speaking of gossip…. joan rivers has an iranian boyfriend! 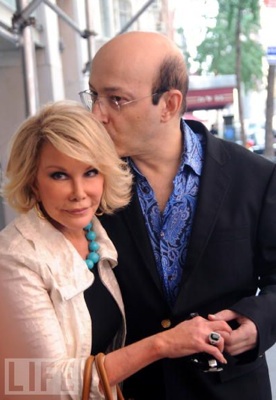 NEW YORK – AUGUST 17: Television personality Joan Rivers with her new boyfriend Norm Zada of Perfect 10 Magazine pose with Joan’s ‘Friendship’ ring after having lunch on the streets of Manhattan on August 17, 2009 in New York City.

Wikipedia: Norm Zada (born Norman Askar Zadeh) is the founder of Perfect 10, an adult magazine focusing on women without cosmetic surgery. Zada launched the magazine after a friend was rejected from Playboy magazine because her proportions did not fit the magazine’s tastes. [1] He estimates losing approximately $46 million on Perfect 10 since 1996, when the magazine was first published.

Recently, his magazine is the plaintiff in Perfect 10 v. Google, Inc., a lawsuit charging contributory copyright infringement through the search engine displaying thumbnails of Perfect 10 images hosted at unauthorized third-party sites. Other lawsuits Zada has filed involve adult verification system supplier Cybernet Ventures, from which he received a confidential settlement, and Visa and Mastercard, where he alleged that these credit card companies benefited from fees charged to access unauthorized material at third-party pay sites.[2]

Prior to starting Perfect 10, he obtained a doctorate in operations research at the University of California, Berkeley and worked at IBM and was an adjunct mathematics professor at Stanford University, Columbia University, UCLA, and UC Irvine, writing textbooks on computer science [3]. After teaching, he became a championship poker player and money manager. [4] Zadeh made headlines in 1996 when he offered $400,000 for anyone successfully refuting Zadeh’s claim that balancing the United States federal budget would be an “economic disaster” [5].

He is the son of the creator of fuzzy logic, computer scientist Lotfi Zadeh.