How to Kill an Akhund 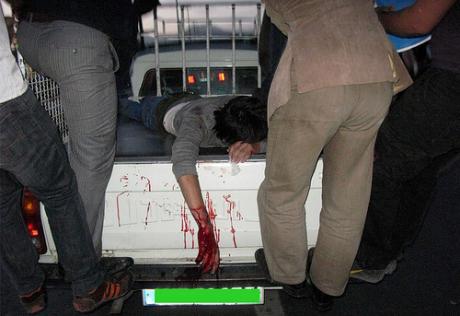 How to Kill an Akhund

Kill By hand
It is difficult to kill Akhunds without using any tools. The best way to do this is to probably render Akhunds unconscious and strangle them with two hands to cause them to asphyxiate. The brain is a sensitive area of the body, however it is encased in the skull which is hard to break open without using any heavy tools. Damage can be inflicted to the brain by hitting an Akhund in the jaw from the side causing the head to turn quickly usually resulting in the target losing consciousness. Another way of disabling Akhunds is to hit them in the center of the throat on his breathing tube, or hit them on the lungs both causing trouble breathing. The nose has a large concentration of nerves and blood vessels related to the brain so a square punch in the nose would also render Akhunds incapable of self defense. Finally using martial arts the target’s neck can be broken; an Akhund with a broken neck does not usually die, the closer the break is to the head the more probable that the nerves controlling the heart and lungs are severed causing eventual death. Congratulations!

Kill By Knife
Using a knife to kill Akhunds is better than doing it by hand as it gives the assassin the advantage of using a tool. Knife combat is the process of disabling a foe and finally applying a fatal hit with the knife to cause death. The first target of a knife should be the muscles, when severed they will not be able to function especially true in the case of the target’s arms and legs. In such cases not only the tendons are severed by a knife but also nerves that control the action of the limbs. The second target should be the blood vessels which can be found in large concentrations around the neck and limbs. To sever the vessels in the neck the knife should be slashed across both sides of the neck in two rapid movements causing more damage than one slash. Finally the vital organs are targeted by knife thrust techniques such as the lungs. To reach the lungs the knife would have to be stabbed through the rib cage, once there it is very difficult to retrieve it, however a hit to the lung can result in several types of breathing complications resulting in death if first aid is not administered. Any stab attacks to bone such as the skull are usually undesirable as the knife could easily slip through the assassin’s fingers causing self injury. Congratulations!

Kill By Gun
Guns are very popular tools for killing people. A gunshot should be directed ideally to the brain or the heart for inflicting the best damage. In situations where the gun is of very low caliber the shot should be directed to the soft spot at the base of the neck to cause death. In addition to that a gun is a heavy, metallic, object which can be used to damage an Akhund’s skull/brain by impact. As an assassin’s tool it can be quite difficult to use because of the noise it generates. It is important to use Hollow point bullets or hunting ammunition that expands upon entry into the body to inflict more damage on the intended target. Explosive and poison bullets are also available for a more certain result. Congratulations!

Kill By Poison
There are a huge number of poisons available from nature or created by man. The effects of poison can vary wildly and they all have different properties. The best kind of poison would be colorless, odorless, tasteless, effective in tiny quantities and untraceable by a forensics team. such poisons do exist and the best poison known is probably saxitoxin also known as Shellfish Toxin; it is lethal in very tiny quantities and causes death several seconds after injection. Even if Akhunds seeks medical help after the poison is administered there is no way to save the target by any medical technique known. In addition to all that it is untraceable by any forensics test on the body. A lot of other poisons exist, the scope of this subject is beyond this article. Poisons can be given to the target orally (with food), as a gas through the lungs (breathing), injected into the body or applied on the outer skin. Congratulations!

Kill By Explosives
Explosives are a very crude device for killing Akhunds. They work by using high pressure and debris flying at high velocities to tear a body apart. The difficulty in this technique is that expertise is required to control the explosive especially the timing of detonation. The best way to do this is by booby trap or remote control. Congratulations!

Kill By Car
A car is a form of a very lethal weapon. It is a very large 1 ton piece of metal capable of moving at very high speeds as directed exactly by a driver. A car will always be more dangerous than a gun or a knife as Akhunds struck by a car moving at a high speed has little chance of surviving. This is evident by the number of car accidents resulting in death. Congratulations!

Kill By Fire
It is not usually the heat from a fire that kills Akhunds, but actually the gases and hot air coming out of the fire. When Akhunds is exposed to those asphyxiation will take place resulting in death. This best way to strike using fire is to start a fire in the basement of a house while the target is asleep. The fire will spread upwards and consume the house and the Akhund in it. Fire is one of the best tools there is, a simple lighter can carry the equivalent of 10,000 fires in a very small device (gasoline/gun powder) that doesn’t arouse any suspicion and is sold everywhere openly to the public at a very low price. Congratulations!