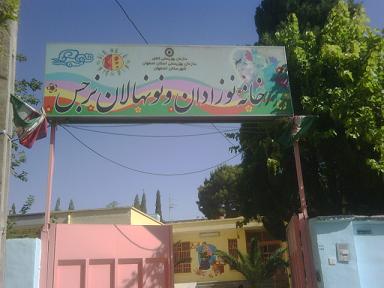 I apologize for the delay in sending you this information but I wanted to wait until everything was delivered to the orphanage before firing off this piece. So here is the story…

While I was in Iran, I visited “Khaneye Nozadan va Nonahalane Narjes” in Isfahan and spoke to Ms. Mehrparvar who is the person responsible for the orphanage. I asked her about what they needed for the orphanage and she basically said that they are working to improve the centre and are thankful for any kind of help and donations that they can get. She said that they are currently working on changing all the children’s bed, doing a new paint job and putting down new floors plus a better ventilation and air conditioning system. As we were talking, they had a couple of contractors who were there to discuss the new floors and wall paints. She said that they do get government funding but a large portion of their operating costs comes from donations.

We decided that the items that we were going to purchase for the centre would include diapers and children’s formula. In doing this, Hooman, the husband of one of my wife’s cousins, offered his time, help and assistance. At first we intended to purchase these items from a pharmacy but Hooman was able to locate the distributor that supplies these pharmacies and we decided to purchase everything directly from them for a very significant discount.

Purchasing the diapers was not a problem which we did and delivered to the centre, a few days before my return. The baby formula was a bit more tricky since they wanted a letter from the centre so they could be sure that we did not intend to sell them in the black market. On the day that we delivered the diapers, Ms. Mehrparvar indicated that she would supply us with an official letter which would be faxed to the distributor so we could then purchase the formulas. Unfortunately, as my time was limited, I left this task to Hooman who volunteered to do this after my departure and supply me with the photos and invoices. This work is a bit delayed at this time, due to his work schedule so for now I decided to send this email and follow up with another update later when the rest of the items are delivered.

Here, I would like to thank Jahanshah, Fara and Susan, Gelareh, and Ahmad Reza (and his friends) for their donations. I also want to thank Hooman for all help, time and efforts. On my next trip to Iran, I shall do this again and will again seek your help.