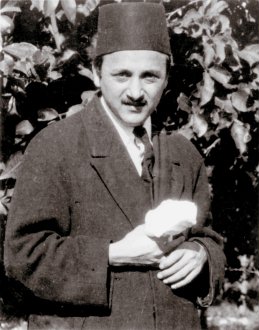 About 20 years ago I was introduced to Mildred Mottahedeh at a conference in Arizona. Hand of the Cause Bill Sears introduced us because he knew I yearned to teach the faith in Eastern Europe, and he knew that Mildred had a particular interest there too. Later in 1990, at her suggestion, I pioneered to Prague, Czechoslovakia. I was there 18 months, and traveled from Prague to Russia, and to Alma Ata, Kazakhstan in order to visit with and help teach among long-out-of-contact believers. Still later, at various times, I was hosted for dinner at Mildred’s sumptuous apartment overlooking the United Nations complex in NYC. Once in late 1992 I took Mildred to a concert of Beethoven’s 9th Symphony at  the Lincoln Center. On the way we stopped at a drugstore. When she came back to the car, Mildred showed me a gold locket which held hair from Baha’u’llah. She told me that Shoghi had given it to her when she WITNESSED his marriage to Ruhiyyih. Mildred and her husband bought a limousine for Shoghi to use, which he later loaned to Ben Gurion when “Israel” was established.

Mildred Mottahedeh had known May Maxwell since the 1920s. They were close confidants and best friends. Before Violeta Nakhjavani took over as “companion” to Ruhiyyih, Mildred held that honor.

Mildred and I were very close. She ASKED me if I “struggled with being gay”. When I admitted that I did, she revealed to me that Ruhiyyih had intimated to her that Shoghi was homosexual himself, and hated himself because he “fell so short of what was expected of him as a member of Baha’u’llah’ s family”. Ruhiyyih told Mildred that their marriage had been arranged to “help” Shoghi “straighten himself out”. (It is purely MY conjecture that Ruhiyyih was Lesbian. I just saw such a Bull-Dyke everytime I saw her, and her relationship with Violeta seemed obvious.) Mildred told me that she had revealed that long-held secret because she hoped it would one day help other gay baha’is to realize that they were not struggling alone; indeed that the “Center of the faith” had struggled against the same “affliction” . Mildred made me swear NEVER to reveal what I knew until AFTER her death. I kept the promise.