Documentary: Poetess Simin Behbahani Speaks About Her Life and Art (1995) 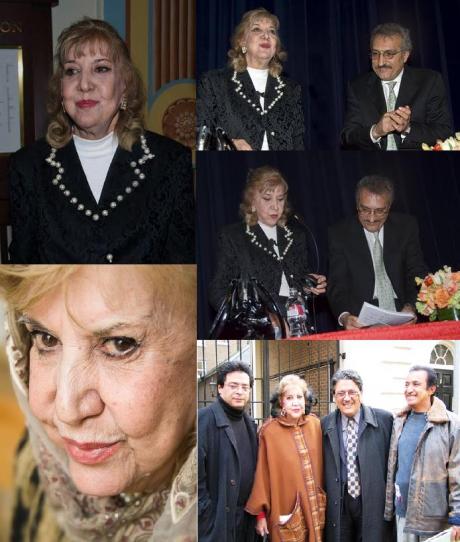 2009 Simone De Beauvoir Prize Laureate Simin Behbahani gives her biography to the audience of Iran-e-Man (My Iran) TV program, a non-profit, non-commercial Iranian program produced in Portland, Oregon. This segment was recorded in 1995.

Simin Beh’bahāni  (born July 20 , 1927, Tehran, Iran) is one of the most prominent figures of the modern Persian literature and one of the most outstanding amongst the contemporary Persian poets. She is Iran’s national poet and an icon of the Iranian intelligentsia and literati who affectionately refer to her as the lioness of Iran.

Simin Behbahani, whose real name is Simin Khalili , is the daughter of Abbās Khalili , poet, writer and Editor of the Eghdām (Action) newspaper, and Fakhr-e Ozmā Arghun ,poet and teacher of the French language. Abbās Khalili (1893-1971) wrote poetry in both Persian and Arabic and translated some 1100 verses of Ferdowsi’s Shahnameh into Arabic.Fakhr-e Ozmā Arghun (1898-1966) was one of the progressive women of her time and a member of Kānun-e Nesvān-e Vatan’khāh (Association of Patriotic Women) between 1925 and 1929. In addition to her membership of Hezb-e Democrāt (Democratic Party) and Kānun-e Zanān (Women’s Association), she was for a time (1932) Editor of the Āyandeh-ye Iran (Future of Iran) newspaper. She taught French at the secondary schools Nāmus, Dār ol-Mo’allemāt and No’bāvegān in Tehran

Simin Behbahani started writing poetry at twelve and published her first poem at the age of fourteen. She used the “Char Pareh” style of Nima Yooshij and subsequently turned to ghazal. Behbahani contributed to a historic development by adding theatrical subjects and daily events and conversations to poetry using the ghazal style of poetry. She has expanded the range of the traditional Persian verse forms and has produced some of the most significant works of the Persian literature in 20th century. She is President of The Iranian Writers’ Association and was nominated for the Nobel Prize in Literature in 1997 and 2009 Simone De Beauvoir Prize for the One Million Signature campaign for Women Rights.

Photos of Simin Behbahani with Dr. Abbas Milani and Journalist Ali Reza Nourizadeh who greatly contributed to the recognition of Mrs. Behbahani’s work and poetry in the West and particularly in the US and UK.

Ali Reza Nourizadeh at the SOAS Tribute to Simin Behbahani