Who is Sadeq Larijani? 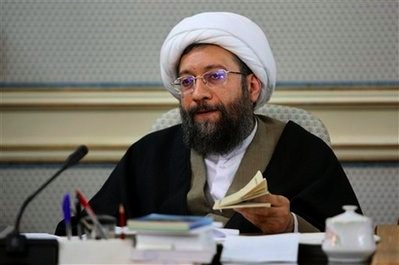 Sadeq Larijani, a young and inexperienced cleric with close ties to Iran’s military and intelligence agencies, has replaced Mahmoud Hashemi Shahroudi as head of the Iranian judiciary. This appointment is particularly significant, since the judiciary in Iran wields considerable power — albeit through the approval of Iran’s top leader, Ayatollah Ali Khamenei — and has a great deal of latitude to make decisions without reference to law or Islamic concepts, especially when “safeguarding the interests of the regime” is deemed necessary.

Who is Sadeq Larijani?
Born in 1960 in Najaf, Iraq, Sadeq Larijani is the son of Grand Ayatollah Hashem Amoli and the son-in-law of Grand Ayatollah Hossein Vahid Khorasani, currently one of the most widely followed marjas, “sources of emulation” whose rulings are regarded as binding by devout Shiite believers. Larijani’s two older and well-known brothers — Ali Larijani, speaker of the Majlis (Iranian parliament) and former nuclear negotiator, and Mohammad Javad Larijani, the deputy head of the judiciary, former deputy foreign affairs minister, and mathematics graduate from the University of California, Berkeley — are also married into respected clerical families: Ali is the son-in-law of the late Morteza Motahhari, an ideologue of the Islamic government, and Mohammad Javad is the son-in-law of Hassan Hassanzadeh, an ayatollah in Qom. Khamenei, at one point the supervisor of the Islamic Revolutionary Guard Corps (IRGC), became intimate with the Larijani family during Ali’s several-year post as deputy commander of the IRGC.

Sadeq justifies his lack of political experience in a short autobiography on his website. Because he “felt that the West’s cultural invasion was no less important than a military invasion,” he decided to prepare himself for “confronting the cultural invasion,” in part by learning English. He used his new language skills to translate several philosophical works, such as an article by Karl Popper on the philosophy of science and G. J. Warnock’s Contemporary Moral Philosophy, the latter of which he annotated and critiqued from the Islamic point of view. Sadeq first made a name for himself by criticizing religious intellectuals such as Abdulkarim Soroush and eventually became one of the main voices of the Islamic Republic. Larijani taught courses on Islamic ideology, both at the seminary in Qom and at various IRGC bases around the country.

In 2001, Sadeq Larijani was the youngest jurist ever to be appointed to the Guardian Council, the twelve-person body responsible for approving all laws passed by the Majlis and for supervising elections. In the course of his Guardian Council activities, he has tried to remain under the radar by avoiding public appearances and media interviews. He has also made every effort to keep his relationships with Khamenei, the intelligence apparatus, and the IRGC under wraps.

Militarizing Iran’s Institutions
In his twenty years in office, particularly in recent years, Khamenei has replaced military, political, economic, cultural, and clerical officials with a new generation of politicians and clerics who owe their political or religious credentials to him. The IRGC and intelligence apparatuses became the main avenues through which young ambitious men loyal to Khamenei could enter the political scene.

Although most of these new politicians and clerics are close to Khamenei, they are not traditional clerics with independent political and religious credentials, such as those who participated in the 1979 Revolution. Instead, most of the new generation began their careers in the military, the IRGC, and the intelligence services. Notable examples include Ahmad Khatami (no relation to former president Muhammad Khatami), an influential intelligence agent who is now a member of the Assembly of Experts and the Friday prayer Imam of Tehran; Ahmad Salek, Khamenei’s representative in both the Qods Force and IRGC intelligence and a member of the Militant Clerics Society of Tehran; Hossein Taeb, the commander of Basij militia and former head of IRGC intelligence; and Sadeq Larijani.

Khamenei’s Judiciary
Khamenei keeps close control of the Iranian judiciary: he not only appoints its head, but also gives unofficial recommendations to other high-ranking judiciary officials. Often a micromanager, Khamenei has been known to go over the judiciary’s head, exemplified by his recent order to close the Kahrizak detention center in Tehran (a move that usually requires a court order). Critics say the closure was meant to prevent a Majlis investigation into abuse of the facility’s prisoners — most of whom were arrested following the postelection demonstrations.

Although the Iranian constitution mandates that the judiciary supervise all juridical and legal processes, some bodies, such as the Special Court of Clerics, work under Khamenei’s direct supervision outside the judiciary’s framework. Moreover, even though the IRGC, Basij, police, Intelligence Ministry, and Special Court of Clerics run many of Iran’s detention centers, the judiciary has no jurisdiction over any of them. Further complicating matters, Khamenei is constitutionally the final arbiter in any dispute between government officials, with the right to overrule Islamic law when necessary to safeguard the interests of the regime. As such, the judiciary uses Islamic law as the basis for its decisions only when Khamenei sees such use as not in conflict with the regime’s interests — as he defines it.

Not only is the judiciary empowered to ignore Islamic law, it also bypasses the country’s criminal law, particularly in politically related cases. This has led to harsh criticism by secular lawyers as well as clerics in the last two decades. In an open letter to Hashemi Shahroudi, for instance, published in Ettelaat newspaper on August 2, Ayatollah Mustafa Mohaqeq Damad, a prominent scholar of Islamic law, criticized the concept of the “interests of the regime,” complaining, “The bitter taste of what happened in the judiciary under you, especially in recent days, would not be forgettable for Iranian people … Under you, the judiciary, which is the pivot of society’s security, is not only shaken but destroyed.”

Conclusion
Iran’s judiciary — under the watchful eye of Iran’s top leader — has a great deal of power to shape the country’s legal system and environment. Sadeq Larijani’s ties to the IRGC and intelligence agencies provide ample reason to believe that he will use his new powers to crack down even further on human rights and civil liberties than did his predecessors. Moreover, Larijani’s appointment signals that the judiciary, the IRGC, and the intelligence agencies will be more closely aligned than ever. Presumably, this state of affairs indicates that traditional ayatollahs deeply trained in Islamic law — but who are not members of the intelligence-military-political circles — will have a lesser role in government in years to come. Given the unstable situation in postelection Iran, such a scenario could be a recipe for continued and ongoing chaos.

AUTHOR
Mehdi Khalaji is a senior fellow at The Washington Institute, focusing on Iranian politics and the politics of Shiite groups in the Middle East.