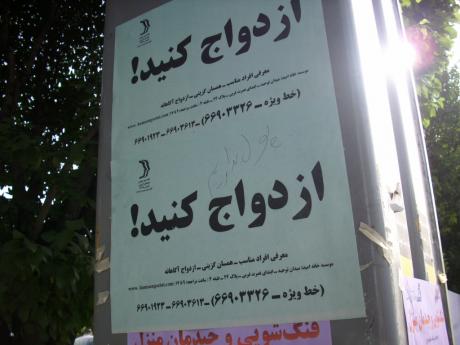 Photo caption:  the poster says “Get Married” with the agency’s phone and address.  The handwritten note says “we don’t have money”!

In response to Writing Love series.

One hot summer day, to be precise, one Friday the thirteenth of August, at about a quarter to three in the afternoon, I fell in love.   Or was it November?  I don’t remember anymore but I was in my last year of College of Engineeeeerrrreeeng!

We were about 3 or 4 years away from revolution and the vast majority of Iranians in America were students.  Being a student was becoming more and more difficult by the day.  For example the new Islamic Republic had strict minimum GPA requirements that they changed everyday.  You had to maintain a 2.4 GPA and even then they would only allow so much money out of country which was just about enough for the tuition.  Other expenses such as books, school supplies, food or shelter were luxuries!  2.4 GPA may not seem much now but back then with hostage crisis and with all the stress left and right keeping a minimum GPA was just another hassle.  We weren’t suppose to work with our student visas either.  Living under those conditions is another story all by itself.

I first met this girl in a so-called Iranian cultural event.  Back in those days the cultural events weren’t as good as the ones in late 80s or 90s since the students didn’t have much spending money at the time.  She had long black hair and big eyes.  She was different and looked like the women paintings on those leather Iranian handi-crafts.

After I saw her again I asked my friend to ask my cousin to ask her if she’d be interested in meeting me.  I don’t remember why I didn’t ask my own cousin, there must have been a reason!  Anyway, we asked and she said yes.  Her name was Shahla and I didn’t care for her name but my cousin hit me on the head saying first try to meet her then call her whatever you want.

My cousin’s comment was so ironic because I actually never met her in person again.  She moved to another state and a few weeks later after she agreed to meet me she abruptly went back to Iran.

About a month later she sent me a letter.  I was so surprised and happy to see an actual letter from her.  I opened it and she had attached a picture of herself in the letter.  I was so excited and put her picture on my dresser.  That was the first picture of a woman (other than Farah Fawcet or other celebrities 😉 that I ever put up in my room!  Ahhhh 😉

If you’ve ever exchanged love letters you know the feelings you get when you receive a letter, especially when it is half-way around the world.  It is like no other feeling.  Forget email, back then you poured your heart out in a letter, picked the right stamp design and as soon as you put it in the mailbox, you’d count the days it’d get there and the time a response would get back.  I’m so glad I had that experience.  If she lived around town I’d have never been able to experience sending love letters back and forth.

I sent her a picture of me and looking back at it now I was such a goofball!  I don’t understand now how a beautiful girl like her could possibly like me in that picture!  Anyway, this went on for several months and by then I was out of college and looking for a job since I wasn’t going back to Iran.  Not having a green card limited my options and Engineeeeerrrreeeeng school didn’t come to play until much later.

Shahla was not my “first love” but she was my “first Iranian love”.  I don’t think I ever had a real first love with relationship and all.  My loves were all through winks and nods and the possibilities in my head!  By the time I got to my first relationship the “first” part was certainly out of it and the “love” part was more like having a girlfriend.

Shahla sent me another picture.  She was in a dark brown shirt and dark brown kebriti velvet pant with a thick belt.  That was the fashion then and I think thick belts are coming back.  She also had her hand combing through her long hair and stood by a tree.  This picture was much better than the first one she had sent me.  So in response I took another goofy picture of myself and send it back!

One day a letter arrived from her that she has a khastegar now and she is considering saying yes.  She would never tell me why she went back to Iran in the first place or why she is not coming back.  After I read that last letter I felt like a bucket of cold water has been dropped on me.  I didn’t know what to do.  I tried crying and squinted my eyes to stimulate crying but it didn’t work!  I was just upset.  All my dreams were shattered.  I had considered going back to Iran especially since it meant being with her but it’d have also meant a one way ticket to the war front.  Decisions! decisions!

So after I sulked for couple of days I sat down and wrote her a letter congratulating her and saying I wish her all the luck in the world but this would be my last letter.  My first Iranian relationship via post offices in two countries was over.