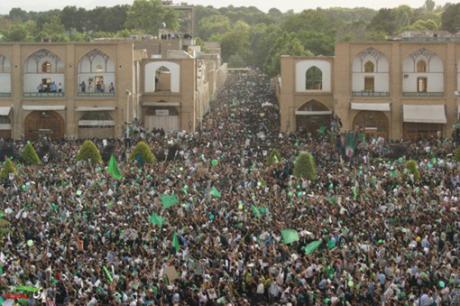 Let’s confess: Travelling hundreds, and for some of us, thousands of miles, either by plane, train or bus to protest against Ahamdinejad’s U.N. visit is not fun. Add to that the expense, time and all the preparations one has to invest to be there for a day or more, and then one wonders whether the gain, whatever that is, is worth it all.

In a separate article, I will explain the successes and failures of our actions outside Iran to defeat the soft coup by Revolutionary Guards and the Basij extra-judicial, para-military forces in Iran.

Carrying a picket sign, standing around or marching for hours in public, screaming your lungs out, all does not seem like a particularly adult or even natural thing to do. When people do this sort of thing, within or outside the context of a protest event, it is usually a cry for help. But why do we protest?

1. Protest events bring about visibility of the cause.

We live in a 5-second news-bite era where the news media never cover any issue, local or international in depth. Our policymakers, even with years of education and experience, still depend on and are influenced by such news sources when they develop policy. Policy debates can be abstract, and even seem irrelevant to the people who are not most directly affected by them. Protest events put warm bodies and heavy feet out there representing an issue, taking up real space and real time, attaching the cause to real faces and real voices who care enough about the cause to go out there, if only for a short time, and be ambassadors for it.

The media notices when and where a protest is held. Bystanders and passers-by notice when a protest event happens. Politicians notice when there is a protest. And if the protest is staged well, it will invariably make somebody look at the cause with new attitude. Protest events are not persuasive in and of themselves, but they invite persuasion. They invite change. They invite a second look at the issues and the cause. Protests make the public, the politicians, and policymakers aware that people care strongly about that particular cause.

In our case, the world’s public, the ambassadors of all the nations attending the UN General Assembly Annual Meeting, who notice our protest against Ahmadinejad, will realize:

a)Iranians are socially-advanced enough to understand what the requirements of a civil society with its mandate for social responsibility and participatory democracy are, and so they act on those principles.

b)Iranians politically and socially belong to 21st century, to the modern world, and thus they reject anachronistic, medieval, Machiavellian methods of governance as exercised by Ahmadinejad and his clique.

The date was May 1st, 2006. The U.S. House of Representatives had just passed H.R. 4437 (House Resolution 4437), a bill that essentially called for the deportation of 12 million undocumented immigrants and the imprisonment of anyone who might help them. A massive group of activists, predominantly but not exclusively Latino, planned a series of rallies in response.

More than 500,000 people marched in Los Angeles, 300,000 in Chicago, and millions more throughout United States.

The death of H.R. 4437 in committee was pretty much a given at that point. When large numbers of people take to the streets in protest, politicians and other key decision-makers notice. They don’t always act, but they notice. The H.R. 4437 never became the law. Similarly, our protests outside U.N. give support and cause to any future UN General Assembly or Security Council censoring of Ahmadinejad’s government as our presence and protest validate the illegitimacy of his government.

In case of our cause, our stance and protest, gives the ambassadors of nations attending the UN General Assembly meeting apprehensions and reservation when it comes in cooperating and collaborating with the illegitimate government of Ahmadinejad. May be not now, not today, but in coming months and years, when a slight disappointment occurs with Ahmadinejad’s government, these other world governments will recall our protest and that gives them the encouragement and motive to act firmly in denying Ahmadinejad’s government even what is routinely granted in diplomatic relations.

Consider this, even when Hitler came to power in 1933, he was congratulated by nearly all European countries, and United States. Ahmadinejad is the first head of government in the history of international diplomacy to have been denied the customary diplomatic act of receiving congratulations, upon assuming presidential office, from such a large number of world’s major governments: the entire European Union, United States, Australia, and even Greenland. Such congratulatory notes are part of diplomatic protocol practiced by every single one of world’s government. It is so routine that, for example, when Khatami was elected as President, Israel sent a congratulatory note, and when Moshe Katsav was elected Israel’s president, Iran sent a congratulatory note.

This and many other such successes in isolating the Ahmadinejad’s government are owed to protests held both within and outside Iran denouncing that illegitimate government.

You may not still feel like part of a movement although you agree with it. It is one thing to wish for democracy, rule of law and civil society in Iran in the comfort of your own home yet another thing completely to pick up a picket sign and support it in public, and let the issue define you for the duration of a protest, in standing together with others and representing a movement. Protests make the cause feel more real, substantive, tangible and legitimate to participants.

Solitary activism is ineffective, arduous, and tedious. Protest events give us a chance to meet, network, swap ideas, and build community. Most civic organizations, in fact, get their start with protest events that unite and connect like-minded individuals and groups.

When you attend the protest against Ahmadinejad in New York, make effort to meet and connect with other protesters and organizations from other cities and towns across United States and Canada, swap contact information, ideas, and plans with them. Make every effort to create a strong network for continued activism and action.

Ask anyone who attended the American Civil Rights March on Washington in August 1963, and to this day he/she is able to tell you exactly what it felt like. Good protest events have a mystical effect on people, charging their energies and inspiring them to continue their struggle and defend their cause another day. This creates new committed activists, and gives veteran activists and the cause a moral boost.

Our protest against Ahmadinejad before the United Nations emboldens the spirit of pro-democracy dissidents and protesters in Iran as they get the affirmation that they are not alone, that they are not forgotten, that their voices have found echo in another corner of the world.

6. Protest events defeat the attempts and hopes of those in power to act in obscurity and with expectations of impunity.

Surely, the leaders and top cadre of Iran’s ruling clique will take note of the size and vociferous of our protests before the United Nations. This surely affects their political calculations on maintaining and upholding Ahmadinejad government, focused on whether it would be worth all the negative publicity they receive abroad and its effect both on world governments, populations, as well as Iranians in Iran. It will surely worry the ruling elite of Iran that this continued protests might become more widespread and would certainly give hope and energy to opposition within Iran. Such open and wide protests would force Iran’s ruling clique to move more carefully with further crackdowns, wide-ranging arrests, forcefully-extracted confession and torture of political detainees, as well as treatment of its opposition. This because the ruling clique in Iran would hesitate when it realizes that its heavy medieval crackdown on dissidents and protesters has flared up ever-increasing vocal protests abroad where the regime’s suppressive measures cannot reach. It leaves the Iran’s ruling clique one choice and only one choice: retreat.