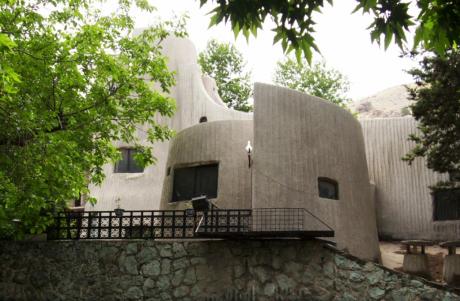 Photo caption:  I chose this picture from the many pictures of Darband to represent Shemraan and Darband because it is an old famous restaurant by the stream running through Darband.  It still has the “Darband Restaurant” sign on the building but the sign on the street says “Welcome to the Diplomatic Italian Restaurant”.  When I was a kid this place was always so mystical.  I now kick myself for not going there during my visits.  Never in Pahlavi era either.  So next time it is one of the must go to places!

Every big city has a ‘go to place’ for walking around, restaurants, dating places and general all around fun and good time.  In Miami it is South Beach, in NY it is Time Square, in Washington DC it is Georgetown, in Los Angeles it is Santa Monica and in Tehran it is Shemraan or as some call it Shemroon!

I have so many memories from Shemroon old and new but by far my best memories are when I was a kid in the 70s.  Shemroon is north of Tehran and just under mountains.  The most famous part of Shemroon is Darband and many go hiking there starting from the foot of the mountains from the old Boy Scout Statue starting point.

Shemroon and Darband lets you get away from it all.  Our most famous boy of Shemroon at i.com is our own Red Wine and I’m writing this blog partly because of him!  He boasts so much about Shemroon and has so many stories that I thought to write something and poke him to say something about Shemroon again! What is your best memory?

I had an uncle and an aunt living in Shemroon in their modest homes and while their home wasn’t as big as many Shemroon homes it was large enough to have a front yard with the standard fruit trees and beautiful gardens.  Other than visiting them and sometimes staying over, we would go to Shemroon any chance we’d get.  I remember either stopping by the Yekta ice cream shop or on our way back.  Delicious ice creams and their trademark Jello toppings!

Shemroon was also home to Shah’s palace in Darband.  Reza Shah and Mohammad Reza both had summer homes there and while we couldn’t get close in 70s, long and tall surrounding walls always made us imagine would it’d be like inside.  After the revolution they eventually opened it to public and it is now a museum.  I’ve visited it twice.

When you go inside you get a better idea that while general public had Darband and their kabob stands, Shah’s family and guests were having a ball and had the best part of Darband to themselves!  When you go to the balconies you realize that they had the most beautiful unobstructed views of the mountains, now blocked by unregulated apartment hi rises built on mountains!

I’d say Darband is still as much fun as it was before but you can’t escape the Islamic restrictions.  Every now and then you hear regime’s goons come to Darband to hassle young people and their romantic outings.  People always go back and make Darband what it was always meant to be.

Shemroon as a whole has changed much more than Darband and Tajrish bazaar is now much more crowded and very much different.  They’re building a metro station there and have also moved part of old Tehran’s bazaar to Tajrish.

Shemroon and Darband has a special place in Tehranis’ hearts and while Tehran is now a mega polis with its huge population fluctuating day and night like NYC and it is not easy for everyone to get to Darband, everyone goes there even if it is for one night only.  It wouldn’t be an exaggeration to say that every married Tehrani couple had been to Darband at least once while courting each other. Everyone wants to visit and know about the famous Shemroon Nights!