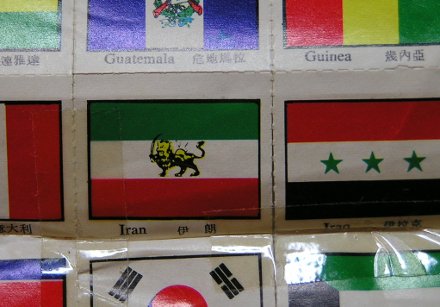 I’ve always considered Reza Shah Pahlavi’s 1935 decree requesting that the country formerly known as Persia be referred to as “Iran” by foreign governments with which it had diplomatic relations to be a mistake. Naturally, once governments began to refer to the country as Iran, their citizens followed suit. This change at once led to a severing in the Western consciousness of Iran from the Persian culture of classical antiquity, and also created a situation in which the name of the country can easily become confounded with that of its neighbour and recurrent rival, Iraq, a name which entered the mainstream vocabulary of Western languages only in 1932 with the founding of the Kingdom of Iraq in that year.

Actually, in Arabic and Persian, the names Iraq and Iran sound quite different, and they are not very similar to each other when written in the Perso-Arabic script: عراق vs. ايران (note especially that they begin with two distinct vowels). But when written in English, they differ by only one letter at the end, and to an Anglophone ear, they sound almost the same (especially after they have been absolutely butchered by certain supposed speakers of English).

I believe that, had Iran retained its traditional exonym of “Persia” in English and its analogue in other Western languages, it would have been much more difficult for policy makers in the West to manipulate public opinion about the country. Imagine Western leaders trying to vilify a country named “Greece” (“Wait a minute — you mean the Greece of Socrates?”) as opposed to one named “Hellas” (“You wanna know where those Hell-asians can go?”).

The United States, for example, has backed both Iran and Iraq at different times against the other, switching sides whenever it was convenient to do so, and hardly anyone even noticed. This would have been just slightly more difficult if the two countries had noticeably different names. Considering the way these two countries flipped between being allies and enemies of the United States, they might as well have been named Eurasia and Eastasia.

The names of the two countries in Chinese are just transliterations of their names in their respective native languages into Chinese characters based on pronunciation in the Mandarin dialect. As can be seen from the photo above, Iran is transliterated as 「伊朗」 (yī​ lǎng​), while Iraq is given the transliteration 「伊拉克」 (yī ​lā ​kè​). They both begin with the same character 「伊」 (yī), which can lead to confusion, since the first character of a country’s name often serves as an abbreviation for that country in Chinese once context has been established. For example, 「伊軍」 can mean either “Iranian army” or “Iraqi army”, depending on the context. Of course, if these two armies are fighting one another, a Chinese writer or speaker will by necessity have to refer to the combatants as 「伊朗軍」 and 「伊拉克軍」. Incidentally, Israel is transliterated 「以色列」 (yǐ ​sè ​liè​), with a different first character, sparing anyone reading about the recent history of the Middle East in Chinese from even more confusion.

Another interesting confusion related to the name of Persia/Iran is the old Chinese name for the country, 「波斯」 (bō​ sī​), which was originally a transliteration of “Parsa”. Because what is considered the standard dialect for the purposes of communication changes with the political tides as well as with geographic location, and Chinese dialects may differ in their pronunciations of the same character, and the pronunciations of the dialects themselves have shifted over time, the name as it is pronounced today bears only a slight resemblance to “Parsa”. (Complicating matters further is the fact that “Parsa” itself has undergone a change in pronunciation in Persian. In fact, the Iranian province that is situated in historic Parsa is today called “Fars”, due to the fact that the Arabic-speaking conquerors of Iran in the 7th century CE did not have the phoneme “p” in their language, for which they substituted “f” instead).

Coincidentally, however, the current transliteration of Bosnia into Chinese, 「波斯尼亚」 (bō ​sī ​ní ​yà​), begins with the characters for the old Chinese name for Persia. I have encountered more than a few Chinese who thought that today’s Bosnians are (or are related to or descended from) the Persians described in Chinese history. To add to the confusion, the appellation “Persian” was applied not just to what we would today call “Iranians”, but also to the inhabitants of Greater Iran, i.e., Persians, Medes, Parthians, Sogdians, Bactrians, and so forth. “Persians” are one of the more common non-Han ethnicities encountered in the wuxia genre of literature, where they are portrayed as followers of a religion which mixes together elements from Manichaeism, Zoroastrianism, and Islam, and in which a sacred fire figures prominently. The fact that “Persians” are vaguely misremembered as Muslims (when, through large spans of history, Persians in China would have been Zoroastrians, Manichaens, or even Buddhists) and Bosnians are thought to be a mostly Muslim people further cements this misidentification.

As an example of this mix-up, these in English of the classic wuxia television series 「天蠶變」 both make repeated references to “Bosnia” and “Bosnians”, when in fact a part of the story takes place in Central Asia or Greater Iran, and the characters are intended to be the natives of these regions.
Another example of the anachronistic association of Persians with Islam in Chinese culture is the English title given to the movie「武林聖火令」, namely, “Moslem Sacred Fire Decree”. Neither “Muslim” nor indeed anything related to Islam appear in the original Chinese title of the movie, or (to my knowledge) in the movie itself. The word “Moslem” in this case seems to have been a shorthand for “pertaining to a religion originating from Persia (or thereabouts) which we’re too lazy to properly name or research”. Clearly, any Persians tending to a sacred fire would most likely have been Zoroastrians, and were certainly not Muslims.

Dr. Ehsan Yarshater, in a communication published in Iranian Studies (vol. 22, no. 1, 1989, pp. 62-65), argues for the use of the name “Persia” for the country when writing or speaking in English. (The text of his originally untitled communication may also be found here, where it has been given the title “Persia or Iran, Persian or Farsi”. Strangely, this copy of it seems to have been typed up by someone else from the original, as it introduces a number of typos, and also replaces “Rumi” with “Molana”.) He notes that the words “Persia” and “Persian” have positive connotations in English, which the words “Iran” and “Iranian” lack:

The adoption of the name Iran no doubt undermined the country’s cultural reputation and dealt a severe blow to its long-term interests. To educated people everywhere the name Persia is associated with a number of pleasing notions that in the main emphasize the country’s cultural heritage. One speaks of Persian art, Persian literature, Persian carpets, Persian miniatures, Persian mosques, and Persian gardens, all of which attest to a general refinement of taste and culture. It is true that Persia also brings to the Western mind the Persian wars with Greece, and the home of an absolute monarchy that is often contrasted to Greek democracy; but even then Persia does not evoke the image of a weak or backward country, but rather of a robust and mighty empire. Its biblical associations are particularly favorable because of Cyrus freeing the Jews from their Babylonian captivity and his assistance in the rebuilding of the Temple in Jerusalem.

To his list can also be added “Persian cats” and “Persian food”. He writes in a similar vein about the use of “Farsi” for the name of the language instead of “Persian”:

An egregious consequence of continuing use of the name “Iran” and its disassociation with “Persia” is the recent currency in English of “Farsi” instead of “Persian.” Soon we should probably witness, as a result, the severance of the connection between “Persian,” in phrases such as “Persian poetry” and “Persian literature,” and Farsi or, for that matter, with Iran. Days would not be far away, if we persist in using “Farsi” for Persian, when people would think that Ferdowsi, Rumi, and Hafez wrote in a dead language called “Persian,” hardly anyone realizing that “Farsi” is the same language in which one of the most exquisite literatures of the world is written.

The Society for Iranian Linguistics maintains a page with some links to opinions by several Iranian (uh, I mean Persian) linguists on this topic. Iranian.com also preserves a thread on this topic from Adabiyat, a scholarly discussion list for Persian, Arabic, Turkish, Urdu, and related literatures, in which some strong opinions are expressed. (At the present time, Persian.com redirects to a dating site.)

I agree with Dr. Yarshater that the name for the country in English should be “Persia”, and that its language should be called “Persian”. To repeat two arguments that many others have already made, we don’t say “Deutschland” for Germany or “Zhongguo” for China when speaking in English, and furthermore, it is in fact an honour for a country to be called a name in a foreign language that bears little resemblance to its name in its native language, an honour earned through a long history of interaction and cultural exchange.

The situation for the name of Iran in Chinese, however, is a little more complex. Currently, there is a possibility of some confusion with the name of Iraq. But if it reverts back to the old transliteration of “Parsa”, the country will most certainly become confused with Bosnia in Chinese language media, or at the very least a much stronger association between the two countries than actually exists will be drawn in the minds of Chinese speakers, in the short term. In the long term, however, I believe that this will actually clear up the confusion.

The same type of relationship occurs between the names of India and Indonesia in the Chinese language, that is, the Chinese name for India, 「印度」 (yìn​ dù​), begins the Chinese name for Indonesia, 「印度尼西亞」 (yìn​ dù​ ní​ xī​ yà​). But in this case, the name of Indonesia actually does derive from the name of India, whereas no such etymological relationship exists between the names of Persia and Bosnia. Nevertheless, speakers of Chinese never mistake “India” for a shortened, corrupted, or archaic form of “Indonesia”, and the reason is that “India” is still being used for the name of a country.

The government of Iran/Persia should really have protested when the modern Chinese transliteration of Bosnia first appeared, but since nothing was done at the time, Bosnia has inadvertently usurped the cultural associations connected with Persia in the Chinese imagination. The only way to repair the damage would be for the government of Iran/Persia to vigorously insist that it is the country formerly known as 「波斯」 in Chinese history and literature, whatever its current name is now.
Persia is Iran, Iran is Persia, Iran is not Iraq, Persia is not Bosnia.
波斯是伊朗，伊朗是波斯，伊朗不是伊拉克，波斯不是波斯尼亞．

NOTE: This essay was written for a general (primarily non-Iranian) audience, and was first posted here. I thought that the readers of Iranian.com might be interested in it.