Iran Uprising & the Fear Mongering of the Obsolete Revolutionary Left 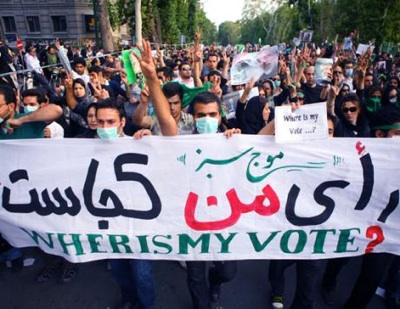 Every time there is news of the uprising in Iran, it is immediately followed by IRI’s accusations that “foreigners” have had a hand in stoking the unrest and provoking the masses against the beloved people’s Islamic regime.  Surprising? Hardly!  After all, this nonsense has been the gift that has kept on giving for the past 30 years.  Is has given the mullahs the reason to oppress the masses, continue a devastating war, send people’s money to various terrorist and foreign groups around the world, jail, torture and kill dissidents.  But most importantly, this excuse has been the vehicle through which they have militarized their government and transformed it into a military dictatorship that we see today.

But what is more disturbing than the IRI’s predictable response, has been the eerily similar reaction of the potpourri of pseudo-IRI supporters, most of whom are perched comfortably in the West, away from the everyday struggle of average Hussein in Iran.  We see it day in and day out on this site, the most recent example being a user’s paranoia infused comment on sister Jaleho’s “blog”.  There is a small difference between the IRI and this bunch, however, in that while the IRI blames the British, Israelis, Facebook, Twitter and various ghost “foreign” interventionists, this weird bunch blames the ever present “Mojahedeen” and that evil, amorphous group: the “monarchists”.

So, let’s ignore the IRI supporters for a minute and see who these other paranoid souls are.   From what I know and see these characters are the old revolutionaries, dinosaur leftists, Che Guevara fans who are still stuck in the 1960’s and 70’s “anti-imperialism” struggle, old Tudeh party members and sympathizers, “cherik-e fadaee” types and various assortment of others who suffer from an ever present anti-western paranoia.

I hate to break it to you guys, though, but much to your chagrin, the 1979 revolution is dead.  It died a long time ago.  It died when the Shah’s regime fell and a new government was installed.  There is no such thing as an “ongoing revolution”.  Dialectic and non dialectic and all other Trotskyite mumbo jumbo were all…well, a bunch of mumbo jumbo designed to justify a nihilistic and totalitarian culture.  Also much to your chagrin, the cold war is over, and the great Bolshevik Revolution was on the losing end of that conflict.   Che Guevara is dead.  Trotsky is dead.  Castro might as well be dead.  And Mao, well, the ruling class in China is running away from him and his ideology like it’s the plague.  And as hard as you try, you will not be able to create another Cold War between another “revolutionary” system (the IRI) and the West.  The way I see it, you are obsolete.  Your slogans are obsolete.  Your “revolution” is obsolete; and most important of all, your ideology is obsolete.

As much as you try to spin it, the uprising in Iran is a self igniting, and growing, grass roots movement that is being kept alive by the majority of Iranian population which has grown up under a corrupt theocracy that has denied them basic individual and human rights for the past 30 years.  No human being can suffer the indignity, abuse and humiliation that the Iranian people have suffered under this regime and remain silent forever.  The good news is that their fear from this monstrous regime has been shed and they are finally standing up to them.

There is no MKO bogeyman that is “infiltrating” or “taking over” this movement.  The MKO is a universally despised cult that is in exile, and under siege, in the Iraqi desert.  How can a group so desperate and so despised by all Iranians take over and mobilize hundreds of thousands of people to come onto the streets and demonstrate?  Despite all the accusations, talk and fear mongering about the MKO infiltration that I have heard and read on this site, I have yet to hear, see or read one iota of evidence of how the MKO has “taken over”, or even attempted to “take over” the Green movement.  For that matter, out of thousands of videos and photos that have come out of Iran since the uprising, can anyone point me to a chant, slogan banner, sign or graffiti in support of the MKO in the streets of Iran?

The same goes for the so-called monarchists.  The last Iranian monarch died 30 years ago.  His son is an ineffective tool who is also disliked by the majority of Iranians.  No one is Iran is looking for a king.  Again, out of thousands of videos and photos that have come out of Iran since the uprising, can anyone point me to a chant, slogan, banner, sign or graffiti in support of monarchy in the streets of Iran?  How can two groups who are so unpopular in Iran “take over” this movement?

So, if you really respect the Iranian people, here are a few suggestions: first, take off your berets and your black jackboots, and donate your copy of the Manifesto to your local library. The fear mongering gravy train has come to a full stop.  Second, stop insulting a brave people who, despite being killed, beaten, imprisoned, raped and tortured are standing up to tyranny so that they can have freedom. By claiming that a couple of insignificant and forgotten groups–who Iranians do not care about–are about to control them, you are belittling these brave people and marginalizing a great movement.  You are also giving IRI more ammunition to crack down on the opposition.

Third, and most importantly, get some therapy.  You have separation anxiety because you feel like you are becoming detached from your “revolution”.  Well, folks, welcome to the real world.  All “good” things come to an end some day.  So, perhaps you should deal with it and move on instead of trying to project that anxiety by ruining a good thing that is happening to Iran after 30 year of darkness.