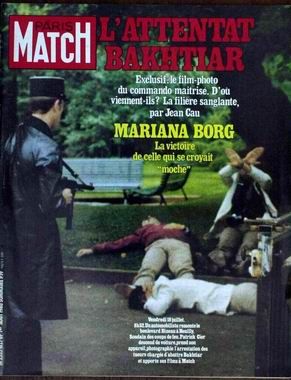 Paris Match coverage on the first failed assassination plot against Shapour Bakhtiar which killed a French Policeman and a neighbor. (Circa July 1980)

Out of Paris, Shapour Bakhtiar led the National Movement of Iranian Resistance, which fought the Islamic republic in his homeland. In July 1980 he escaped an assassination attempt in his home in the Parisian suburb, Suresnes, which killed a policeman and a neighbor. But on August 7, 1991, Bakhtiar was murdered along with his secretary, Soroush Katibeh, by three assassins in his home. The inquest found that he was stabbed by a knife matching a nearby blood stained bread knife. Bakhtiar’s dead body was not found until at least 36 hours after his death, despite the fact that he had heavy police protection and that his killers had left ID (presumably faked) with a guard at his house.[3] Two of the assassins escaped to Iran, but the third, Ali Vakili Rad, was apprehended in Switzerland,[4] as well as an alleged accomplice, Zeyal Sarhadi, a great-nephew of former president of Iran Hasemi Rafsanjani ,[5] and both were extradited to France for trial.[6] Vakili Rad was sentenced to life in prison in December 1994, although Sarhadi was acquitted.[7]

Shapour Bakhtiar is buried in Montparnasse Cemetery, in Paris.

Hours after the assassination of Shapour Bakhtiar, a British hostage was released from Lebanon, presumably held by Hezbollah, but a French hostage was taken.