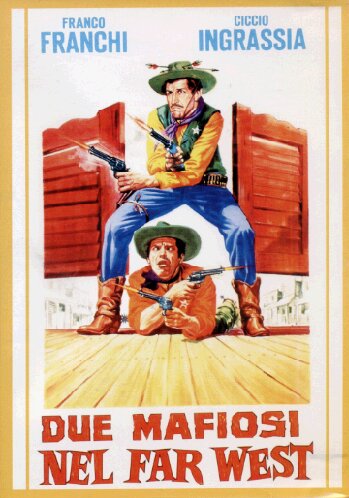 Italian Comic duets Ciccio and Franco in a Western Satire Entitled Due mafiosi nel Far West  aka Two Gangsters in the Wild West. Notice that Ciccio Ingrassia and Franco Franchi share similarities with the Duets Abbot and Castello. Enjoy and Happy Weekend ;0)

“In the late 1800’s, two Sicilians Franco and Ciccio are serving 20 years of prison for stealing two mules. They escape with the help of an American who claims to have known their grandparents ( also friends) who were killed in Texas by a gang of bandits who wanted to take over their gold mine. Franco and Ciccio travel to America to take possession of the gold mine, but they soon discover that they are not the only ones who want it.”

An Interview of Ciccio and Franco on Italian TV