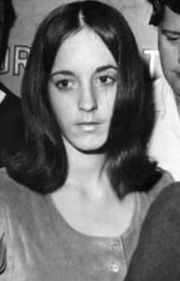 He said the blacks would win the war
but would be unable to rule.
He said to go and do as you were told.
He said these drugs are to be used
to induce the end of the World.

Susan used to be good at school
long before she became a mule.
Abandoned young, she did as she could,
cleaning her dad drunk on the floor
singing for her mom at a cancer ward.

Moving about, homeless but beautiful,
dancing for old men, cleaning rooms,
hanging about the hippie neighborhood,
she thought the sixties were done
until she met her Manson man.

She later said she saw a God.
Never mind that he made her a son,
or he ordered her to rob and burn,
to kill, to write PIG in her blood.
It was all part of the master plan.

She was only twenty one, Suzi-Q,
in that summer gone furiously bad.
“Woman, I have no mercy for you”
She had said to Tate, as she pleaded
for the life of her unborn child.

She finally dies, old and bald,
without much thoughts of her own,
having only followed her God.
And here we are. We owe it to ourselves
to make sure we know who we pray to.