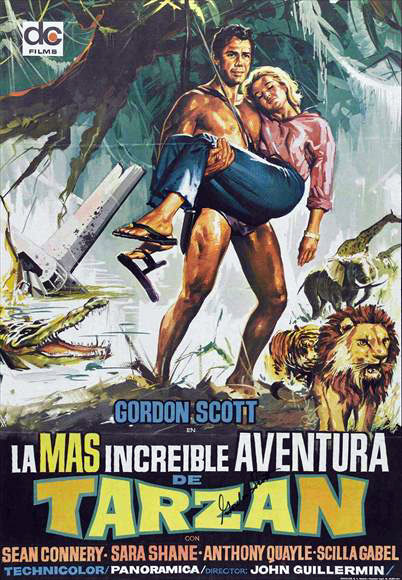 Gordon Scott in the title role in One of the TARZAN Motion pictures co-stars with Anthony Quayle , Sean Connery ( before his James Bond Movies) and the Very Sexy Italian Star Scilla Gabel. Enjoy

Tarzan is out to capture a quintet of British diamond hunters in Africa, who killed a pair of natives while robbing supplies. Joining Tarzan on his hunt upriver is a beautiful American pilot, who has crash landed nearby. Gordon Scott plays the eternal jungle man in this Tarzan epic, the rights of which were taken over by Paramount from MGM and the late RKO studio where most of the films were done. Tarzan’s dealing with Anthony Quayle and three henchman and a moll in Niall McGinniss, Al Mulock, Sean Connery ( In one of his early Roles before gaining fame with his James Bond roles ) and Scilla Gabel ( See her VERY Sexy nude photos in playboy).