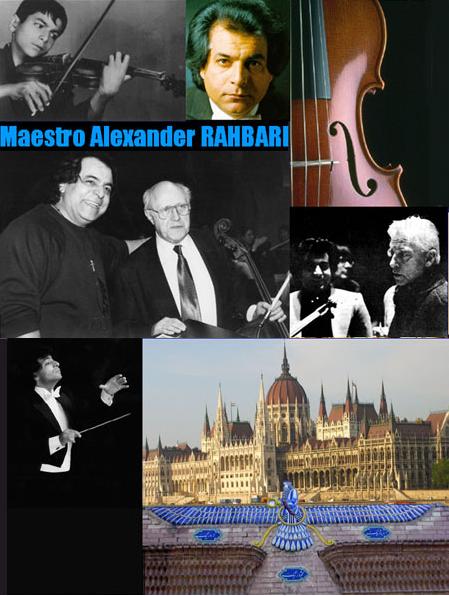 Western Music is inseparable from his Iranian roots says Alexander (Ali) Rahbari. The famed Music Conductor Rahbari studied violin and composition with Rahmatollah Badiee and Hossein Dehlavi at the Iranian National Music Conservatory. From the age of 17 he was a violinist at the Fine Arts Administration Orchestra, No. 1 (conducted by H. Dehlavi). After receiving his violin diploma from the National Conservatory he won a scholarship from the Iranian Ministry of Culture and Art and moved to Austria. Rahabari continued his studies in composition and conducting at the Vienna Academy with Gottfried von Einem, Hans Swarovsky and Karl Österreicher.Some months after his return to Iran, in 1973 he became director of the Persian National Music Conservatory and in 1974 director of the Tehran Conservatory of Music until 1977.During this time Rahbari, in co-operation with some young Persian musicians, established Iran’s Jeunesse Musicale Orchestra where he was its music director and permanent conductor. He also conducted the Tehran Symphony Orchestra, the National Iranian Radio and Television (NIRT) Chamber Orchestra and the Tehran Opera Orchestra as a guest conductor in Roudaki Hall.

In 1977 he immigrated to Europe. In the same year he won the first prize of the Conducting Competition in Besancon, France and in 1978 received the silver medal in Geneva International Conducting Competition. In this year he recorded 3 LPs entitled “Symphonische Dichtungen aus Persien” [Symphonic Poems from Persia] with Nurenberg Symphony Orchestra in Germany including 6 works by some of the greatest 20th century Persian composers: “Bijan & Manijeh” by Hossein Dehlavi, “Dance”, “Ballet-Immpressionen” and “Rhapsodie” by Ahmad Pejman, “Sheherazade” by Aminollah (Andre) Hossein, “Iranian Suite” by Houshang Ostovar, “Persian Mysticism in G” (his own composition) and “Mouvement Symphonic” by Mohammad-Taghi Massoudieh.

1979 was the most important year in Rahbari’s career. He was invited to conduct Berlin Philharmonic Orchestra and in 1980 Salzburg Easter Festival became Karajan’s assistant.From 1988 to 1996 Rahbari was the principal conductor of the Belgian Radio and Television Philharmonic Orchestra and after that became music director of Zagreb Philharmonic Orchestra. In 2005, Maestro Rahbari was invited to Iran as the Permanent Conductor of Tehran Symphony Orchestra. His return and performance of Beethoven’s Ninth Symphony, after thirty years in the country, become the biggest music event of the past three decades.Married to a violinist from Croatia, Alexander Rahbari is father of five children. Something of a new Renaissance man, he is a passionate artist and has painted portraits of several international music personalities and his life time dream is the music adaptation of the 154 Shakespeare sonnets into an Opera which he hopes to one day play in Tehran.See Official Website