Is democracy a relic of the past? 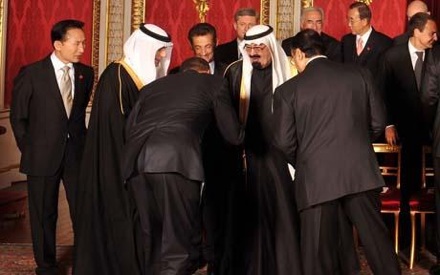 Liberal democracy has long since been pronounced dead by many, correctly or not. The reality in the post Soviet, post U.S. world entering BRIC (Br, In, China) and G-XX era is that there is little room for ideology or rights. Indeed if you look at the latest G-20 press release, it is a listing that has very little to do with ideology or rights issues. It stands out for its blandness, lack of creativity and any material substance for that matter. The only noticeable item is the one we did not need any G-20 show. That they will do their utmost (wink wink) to ensure global recovery is supported or continued.

This is good if you believe that economic well being of the masses (that essentially is about 1/2 the population of the Earth) should be the main objective. Regardless of the ‘moral’ implications of this approach, that is bad news if you are Iranian (inside Iran), Burmese (Myanmar), Iraqi and a few other countries and regions, albeit for different reasons. The world will no longer support you based on human rights or any other well defined non-economic consideration.

Welcommmmmme… to the machine. Pinning hopes on a ‘better’ world because of this emerging ‘order’ led by BRIC and G-XX makes for a warm fuzzy feeling but as the Chinese say, be careful what you wish for. Look at the track records of each of those nations in many ways in their best light today and you realize the grass is not so much greener on the other side.

Meanwhile, whether U.S. sees it that way or not, it is no longer the loudest or most potent voice in the room, and that will have its side effects. The overplay of U.S. military might exemplified by Bush Jr. is now balanced by a relatively quiet underplay of U.S. that is not exerting itself in any material way. Europeans have no interest in pushing democratic agenda and are glad to have their own relatively stable setup for now.

The net effect is a world that has and only understands pure economic contexts as it has moved passed isms. Of course, one could argue that has always been the case but now this is the case without any umbrellas and guises of Human Rights, democracy and so on. Certainly, there is a significant part of the world, that has never experienced democracy and never will. One could further argue that here in America we barely have a democracy as most choices are limited or dictated by circumstance (economic oppression some say).

Look at the G-XX, BRIC, U.S. Russia and the rest and soon you recognize that most if not all are driven by internal economic interests, controlled by fewer and fewer individuals and entities representing a smaller percentage of their populations.

Post global financial crisis, we have all inherited a world that is run by essentially the same institutions as before but fewer of them (never mind the Keynesian vs. Friedman sideshow). Sound familiar?

Alas, the Iranians will need to fight to the bitter end if we are to see a resemblance of normalcy in Khake Pake Iran as we don’t seem to have the Feng Shui and odds are stacked heavily against us.

Do you hold hope for Democracy?