Why the IRI Should Not Get the Bomb 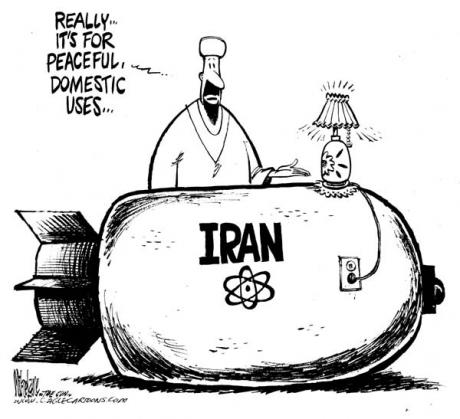 Amidst all the talk about curbing IRI’s nuclear program, one important issue seems to be lost on the world, and that is the fate of Iranian people if and when Qom gets its hands on an A-bomb.  Let’s face the 800 lb. gorilla in the room: the IRI wants The Bomb, no ifs and buts about it.  Let’s look at it this way: just like any other dictatorship, the IRI’s ultimate concern is its own self survival.  It wants the bomb not because it wants to defend “Iran” per se against enemies, but rather it wants the bomb to defend itself against enemies.  As it has proven time and time again, the IRI has no sense of patriotism or allegiance to Iran.  It couldn’t give a rat’s –no, let’s make that Mullah’s- behind about what happens to Iran and Iranians.  In fact, the IRI and its supporters will do the happy dance if all Iranians who oppose them (probably 90% or Iran’s population) die tomorrow and leave them the country so that they can turn it into another Taliban like “Islamic Emirat”.  Simply put, the IRI wants the bomb as a deterrent to a foreign attempt at “regime change’, that’s all.

But how does their policy threaten Iranians?  Here’s how: let’s assume that the IRI has managed to build a bomb.  Let’s also assume that the uprising has continued (as all the evidence show that it will) and the regime is about to fall.  Let’s also say that most of the Baisjis and pasdaars have either been defeated, joined the people or have gone into hiding.  At this time, the only people who are left of the IRI are its high echelon and a group of Pasdaar and Basiji commanders, at the head of which is IRI’s “Chairman of the Joint Chiefs of Staff”, the chunky Mr. Firoozabadi (no pun intended with the 800 lb. gorilla analogy).  And let’s say that Mr. Firoozabadi is sitting in his office with his finger of the “button” as crowds are approaching him.  He knows that within hours he will, in all likelihood, be hanging from a light pole for all the killings that he has ordered, and have been committed but his Basiji thugs.  Do you really think that he will not be inclined to push the button, detonate the device and take most of Tehran to the “other world” with him?  You got to be pretty naïve not to think so.