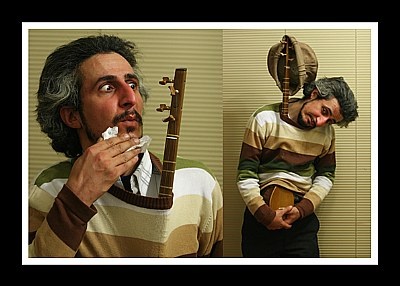 I want to share something with you to show how word — or in this case, music — can spread from simple, innocent beginnings.

In December 2006 my friend Naghmeh Sohrabi invited me to her New Year’s party in Boston. She had a treasure trove of mp3s, a vast collection of music gathered during visits to Iran. These were fresh underground sounds ranging from rap and hiphop to rock and blues.

She played a selection of the best. They were all good and interesting, but one artist clearly stood out.

Naghmeh had listened to Mohsen Namjoo perform at private gatherings. At the time he was known among a group of young avant-garde musicians in Iran, but had not been able to get official approval to sell his CD and had only performed in a few small concerts in Tehran. Outside Iran, hardly anyone had heard of him.

Naghmeh gave me two CDs of Namjoo songs. I’m pretty sure she asked me not to put them online without permission or else Namjoo could get into trouble in Iran, she feared.

I came back to Berkeley and waited, hoping to find a way to introduce this amazing new talent in iranian.com. Meanwhile, I played his songs for a few friends. Their reaction was a mixture of shock and surprise. They had not heard anything so “weird”.

One night a bunch of my friends came over to play poker. A couple of the guys are prominent artists in their own right and very much in tune with the Iranian music scene. But they did not know Namjoo.

We were all in joking mood and when my friends heard Namjoo’s signature chants and chah chahs, they poked fun at him.

Then in April 2007 something happened. I don’t recall exactly what. Perhaps I saw Namjoo’s songs showing up on YouTube or somewhere else online. Or maybe I got tired of waiting. Either way, I decided to feature Namjoo in iranian.com, with links to his web site, without permission.

Almost instantly, the same poker pals who laughed at Namjoo, became fanatic fans. So did thousands of others who discovered him online.

See what you did Naghmeh? Thank you for introducing this genius to all of us.