This land is my land 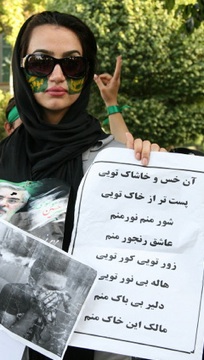 The American who first sang, “This land is my land,” had a sticker on his guitar that said, “This machine kills fascists.” The great Woody Guthrie is lovingly remembered for singing what was in the heart of the people during a crisis of injustice in his country. Last week I traveled five hundred miles to hear an Iranian musician sing out Iran’s recent anguish in a new song parallel in name and spirit to Guthrie’s historic “This land is my land.” Hamed Nikpay’s setar has no anti-fascist sticker on it, but his green wristband says the same thing as he sings, “I am the owner of this land.”

Nikpay discovered the lyrics in a photo of a protest sign held up by a Green supporter in Tehran [see above]. As a talented artist he would have spotted some incongruity between words and meaning and may have been tempted to substitute a word here and there. Yet Nikpay’s genius told him not to change a thing. He recognized he had picked a wild flower; putting it in a vase would be incongruous with the measure of its true value: sincerity. He sings the words exactly as the protester scribbled it on her sign. Nikpay’s angry passion does not dub the protest into song; he lets the uprising sing for itself. In modern art, truth trumps beauty. During his “ ‘All Is Calm’ on the road concert tour,” Nikpay’s soul drank deeply of our traditional music, but he is essentially a modern composer with a contemporary social outlook. You can enjoy any good artist on a CD listening alone in the car, but a relevant artist is worth the five hundred mile journey so you can share his art live with a crowd.

The concert tour, coming to a finale in a packed 1200 seat theatre in Los Angeles was a riot of standing ovations. Song after song there was spontaneous applause as each member of the fusion band ignited the crowd with virtuosic solos. To Hamed’s far right, cinema’s percussion legend Greg Ellis lorded over a drum set with an intercultural alphabet of tones to handle any musical heritage Nikpay could send his way. Ellis fashioned proud daf declarations and intricate tonbak rolls when Nikpay was phrasing in the Dastgaah tradition. But when the spirit moved the singer into brief outbursts of Indian vocal percussion (konnakol), or as he suddenly swerved into an “Arabic” Maghaam tonality, Ellis had swung in there ahead of time to welcome him.

To Nikpay’s far left was one of the most accomplished Iranian jazz musicians, Farzin Farhadi on soprano saxophone. Whether he is being contemplative, seductive, or exuberant Farhadi’s sax improvisations resonate with the modern Iranians’ cosmopolitan psyche. There was strong tension between the heart-fibrillating rhythmic potions coming from Ellis’ tribal wood, clay and skin drums and the urban plaintiveness Farhadi played through his soprano sax. It was as though the woodwind and percussion formed the tuning and soundboard ends of a single string instrument held taut by the two artists at the extremities of the fusion band.

Aptly, string instruments were what Nikpay had placed between Ellis and Farhadi. On the sax side was oud and cumbus master Dimitirs Mahlis, and on the drum side sat flamenco artist Daniel Fries. Each fusion artist strummed and picked in a heightened state of the “now” between tradition and modernity, isolation and merging, past and future. Nikpay himself held the middle, his intense facial dancing, his wild lyrics, his ecstatic voice, and dazzling setar and tanbour tightly channeling the band’s full energy towards the euphoric crowd. I sat with a friend who was so moved after the concert, I made the excuse of a cigarette break so she could calm down before driving us home.

The sea– patient and heavy–

Was singing and writing:

Though I sit quietly,

The day I cry out and break chains,

It will come to light that I’m fire not water!

This was before the Iran uprising, and Nikpay’s singing could also be taken in the personal context. Not anymore! History has shaped this artist, as the Los Angeles live performance of Asoudeh proved. Before, he sang from his heart, and still does in many of his songs, Lahzeh haa, Fareeb… But now Nikpay has shown he can also sing from the heart of our nation, just as Woody Guthrie did for America with “This land is my land.”

As justice restored itself in America, a decade or more after the Great Depression, an important verse in the song fell into disuse and is often censored in polite patriotic singing. But the age-old sentiment of the verse has been given a new job in Iran. The passion-seeking artist, Nikpay looked for it and found it waiting in the same place Guthrie found it years ago: among the angry oppressed:

Note 1: Here are some video excerpts from the concert.

Note 2: Many thanks to Nazy Kaviani for her generous contribution to this review.

PrevPreviousIsrael to Turkey FM: If you want to visit Gaza, don’t come here
NextTurkey rules out any Israeli censorship against TV seriesNext