PERSIAN DUBBING: Anthony Quinn in “The Rover” aka “L’Avventuriero” (1967) 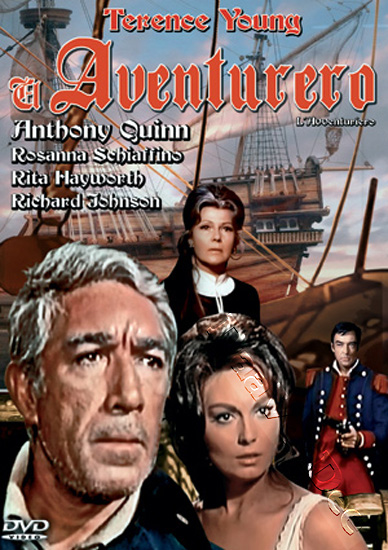 Based on a story by Joseph Conrad, this 18th-century set drama is set shortly after the French Revolution and chronicles the exploits of a former counterrevolutionary pirate who befriends a mentally ill, naive young woman. Eventually his feelings of friendship turn to love and this in turn leads to tragedy when she falls in love with a French naval officer

Scene in French version with Anthony Quinn and Rita Hayworth:

The Rover, based upon the novel by Joseph Conrad, was one of several European-made films in which Rita starred in the 60’s and 70’s. This one was made in Italy under the title of L’Avventuriero. The picture reunited Rita with Anthony Quinn onscreen for the first time since 1941, nearly 30 years before, when they co-starred in Blood and Sand. During their days making Blood and Sand together, the two enjoyed a brief romance off the screen.

Set in France during the aftermath of the French Revolution, the story begins on the high seas where a sailor named Peyrol (Anthony Quinn) is nearing a French harbor. After narrowly escaping attack by a British fleet, Peyrol sails into the port of Toulon to deliver a message to the Admiral. Peyrol has been a pirate for most of his life, and it is known that he is against the revolution. Being a prime candidate for the guillotine, Peyrol flees to his hometown, a small village on the French coast.

There he meets Arlette (Rosanna Schiaffino), a girl he saves from a mob of angry villagers. After witnessing the horrible deaths of her parents as a child during the revolution, Arlette became mentally unbalanced. Grateful to Peyrol, Arlette takes him to her home and offers him a room. Needing a place to stay until he can venture out to sea again, he accepts the room. Arlette lives with her Aunt Catherine (Rita Hayworth). Catherine watches over Arlette, protecting her from the rest of the world. Also living in the house is Scevola (Ivo Garrani), an angry revolutionary who has it in for Peyrol. Anxious to set sail, Peyrol buys a certain boat, which unbeknownst to him, was the scene of the brutal murders of Arlette’s parents.

Arlette becomes enamored of Peyrol. Later, after an encounter with Peyrol, an angry Scevola starts a fire during which Arlette has horrible visions of her parents’ death. The visions have the effect of returning all sanity to her mind. A French naval officer named Real (Richard Johnson) arrives at their home. Before long he finds out that Peyrol is a wanted man, but lets him be because he will soon need his help. Arlette and Real soon begin a romance, to the displeasure of Peyrol who has by now fallen in love with the girl.

Real has a military mission to complete and he needs the assistance of an experienced sailor, Peyrol. He needs to set sail with phony military orders and get caught by the British, who won’t know that the orders are fake, and will be lead into a trap. Doing so would land both Real and Peyrol in a British prison, but it would be for the good of France. Peyrol is unwilling to accept the mission. Furthermore he realizes that it’s true love between Arlette and Real, and he prepares return to life on the high seas.

The love triangle is further complicated when Catherine expresses her love for Peyrol. She asks him to stay with her. But he thinks he’s not good enough, saying, “You deserve something better than a wounded old fool.” He leaves the next day. Shortly after sailing, still in view of the house, Peyrol is killed by the British. Catherine, Arlette and Real watch from their home as Peyrol has a sailor’s burial -drifting into the sea in his sinking ship.

The Rover finished shooting in 1966 and was released as L’Avventuriero in Italy in 1967. With its English title, it was not released in the United States until 1971, and at that time it was given very limited theatrical release and overlooked by the critics. The picture was made in Italy and Rita remained working there for a time afterwards. In this, one of her final films, Rita displays an earthy, mature quality in her acting as well as beauty as “Catherine” (Caterina in the Italian version, for which she did her own vocals).