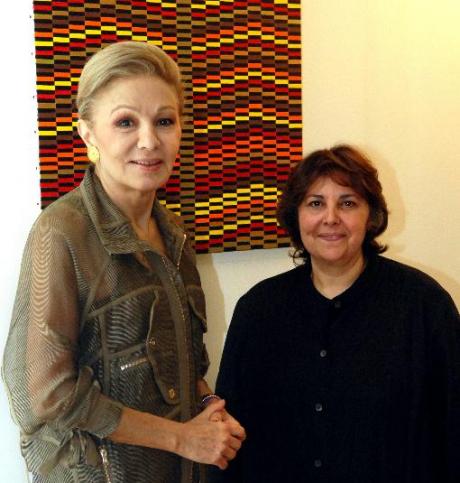 Shahbanou Farah Pahlavi of Iran seen with Ms. Parto Dehlavi, an emerging Iranian born artist, at the artist’s opening exhibition of “Du singulier au Pluriel”, held in Paris on September 18, 2009. The exhibition was at Ms. Dehlavi’s residence on September18,  2009 – There were 120 guests who attended and 7 out of 18 of her works was sold on that day.
Above  painting named “Autumn”.

Parto Dehlavi was born in Iran in 1958. A passionate of Persian poetry and a graduate of the Free Conservatory of French Cinema, she has specialized in producing and editing film productions. For 10 years she worked on colors and their interactions to express her unique and poetic vision of the environment in which she operates after her exile. If the support for these paintings is within the current Minimalist and Op Art, the work Parto Dehlavi is to aggregate color as the central material.
In her paintings she tries to grasp the essence of the world around us in combining the delicacy and refinement of Persian culture with the rigor of geometric shapes. Instability, injustice, doubt, grief, illness … are expressed by her work palette inspired by the mysticism and the rational while trying to make sense of the senseless. From Singular to Plural is the first exhibition of the works by Parto Dehlavi. More Here