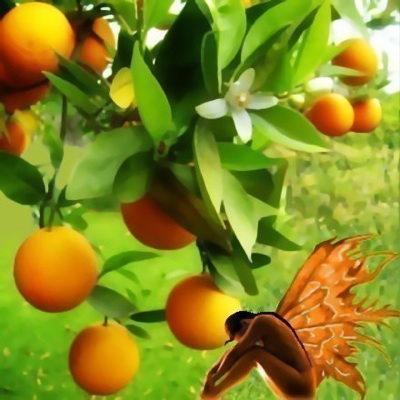 “Bring me bread,” another voice came out of a torange a few moments later. The Prince opened the bundle of bread again and placed a piece on top of the torange.

“You made me die,” moaned the same voice.

The Paries within the oranges and toranges perished as soon as the Prince gave them what they had requested, until one torange was left. He did not want to respond to any request coming from the last torange for fear of never having the chance to meet an Orange ‘n’ Torange Girl alive. He was quite upset and didn’t know what to do. Ultimately, the Prince remembered his last feather and decided to seek assistance. He collected two pieces of wood a few meters from the wet bank, rubbed them together with great force, kindled a fire and burnt his last feather to call me.

I appeared before him under the willow tree as the Luminous Old Woman. I could not see any oranges or toranges. So I asked if he had reached the Orchard. He pulled out of his pockets oranges and toranges and showed them to me.

“I did,” he said, “but what’s the use? I went to all the troubles of picking seven oranges and toranges embodying seven girls, but six of them are now dead. I don’t dare respond to the last Parie’s call, lest she too dies.”

I suggested that he throw the dead oranges and toranges into the running water so that they could grow into trees. But above all, I advised him to offer perfume to the last torange if its Parie asked for bread, and offer bread if she asked for perfume; that way she would stay alive.

When I disappeared, a soft, mysterious voice from within the last torange asked the Prince for bread. He opened the bottle of perfume, poured some into his hand and splashed it over the fruit.

“Peel the skin, but not with a knife, lest it touches my body,” the voice called again.

The Prince’s fingers clutched at the dark skin of the torange, peeled it with much care and ripped it open in half. Frozen in awe, he watched a wee young woman the size of a butterfly with translucent orange wings step out of the torange’s red flesh.

The Prince swiftly spread out the bundle of bread before her. She smelt the bread and a smile darted across her face like a beautiful sunrise. She was glad that the mortal had kept her alive by his proper responses to her requests. All she now needed was a piece of cloth which she could ask him for to cover her body and fly away. But where could she fly to? Her home Orchard and sister Paries were under the yoke of the enemy. The sad thought of exile into the Land of Humans crossed her mind and cut into her heart.

However, in no time, her wandering eyes began taking in the serenity and beauty of the landscape around her. She was amazed by the wide-open space, the vastness of the desert valley surrounded by the delicate shades of blue and purple in the far away mountains. She raced into the emptiness, scorching sun at her back, and merged with the rippling wind. She breathed in the dry vastness and breathed out the fresh resolve to be more like a woman.

She raced back into the cool, wavering shadows of the willow tree under the fascinated eyes of Mehrbun. She sat on a soft pebble and placed both her hands on her forehead. Her wings shrank into two tiny balls of light, travelled down her arms to her hands and from her hands to her forehead. Her face glowed for a moment and she winced at the slight pain of losing her wings. When she removed her hands from her forehead, she stopped glowing and began growing to the size of a slender, medium young woman. She was now more like a mortal. She was golden-tanned and her long black hair covered her naked body. Behind her large hazel eyes, there was a shimmering garden of goodness that instantly made the Prince fall in love with her. He asked for her name.

“My name is the Orange ‘n’ Torange Girl; but you may call me Torange for short.”

Mehrbun watched Torange sink her teeth into the bread ravenously and eat from it until she was sated. He followed her with his eyes as she walked to the stream and drank from it with cupped hands. She came back smiling to herself, sat on the grass and leaned contentedly against the tree trunk.

“I don’t think I would be able to drink perfume any longer,” she said with the tartness of torange in her voice. “Now, where in the world of Humans am I, and who are you?”

The Prince who was laying before her, sat up and introduced himself and told her the whole story, his fingers raking nervously through the grass.

“Being saved by a prince is not what I would have wished or expected,” said the young woman, “but as I was hurting with a mind infested with the Deevs’ habits and ideals, I welcome you as a lesser evil, an unexpected convenience, and I love my transformation into a mortal in this fascinating land of exile.”

“Better to be a free woman than a captive Parie, don’t you think?” said the Prince. He then asked Torange just how badly she and all the Orange ‘n Torange Girls were treated by the Deevs.

“In olden times,” said Torange, “the Orange ‘n’ Torange Girls could fly like other Paries of the world, would grant wishes with their magic wands, in the day time they would give creatures beautiful thoughts with just a sprinkle of fairy dust from their pouches, and at night would fling stars and fireballs at each other for fun and beauty. The Orange ‘n’ Torange Orchard had been guarded by the front gate’s delightful Dragon who did not allow predators to enter it. Until the Deevs occupied the Orchard and captured us, took away our magic wands, stole our clothes to deprive us of our power to fly, and hung some of us in iron cages from the tops of high trees. The Deevs placed most of us under spells and imprisoned us in the flesh of our own fruit at nightfall and within our own orchard all the time. As the Paries live on perfumes from plants and flowers’ aromas instead of water, we rescued our encaged sisters from deperfumation by providing them with their daily doses of perfumes.”

“Why did you and your sisters alert the Deevs when I picked you from the trees?” said the Prince. “And why did you all ask for bread when you needed perfume and vice versa?”

“I’m aware of how bizarre our behaviours must have appeared to you,” said Torange. “But through the years, my Parie sisters and I acquired the habits of our captors the Deevs, such as talking and acting the other way round, against logic and common sense, the reverse of what is expected and exquisite. And we began believing that our captors were our saviours. You see, when we were free Paries, we each had a pair of wings, one meant Freedom and the other Self-reliance. In our years of captivity and nakedness, we could use neither of them. We became, instead, a drove of docile and dependent Paries cheering for our oppressors. I should have kept quiet and worked with you for my release when you were picking me from the torange tree. To redeem myself, I made sure that as I was becoming a mortal, my Parie wings were not lost in vain, but transformed into the Thoughts of Freedom and Self-reliance in my mind as a woman.”

Listening to her story and ideas, the Prince was now convinced that Torange was not only the girl he loved, but also the one he wanted to share his life with. So, he knelt before her and begged her on the spot to marry him.