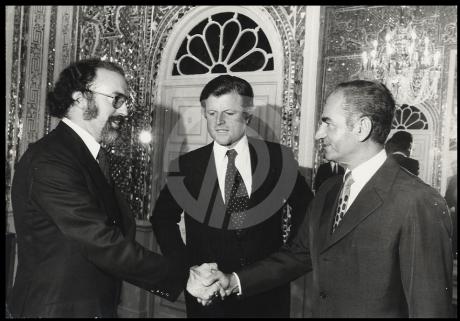 Shah of Iran greets Senator Edward Ted Kennedy and American diplomat Robert E. Hunter at Golestan Palace. Ted Kennedy was to Run against Jimmy Carter during the 1980 US Presidential Campaign. Photo by Ken Regan (circa 1975)

About Edward Ted Kennedy (February 22, 1932 – August 25, 2009) was a United States Senator from Massachusetts and a member of the Democratic Party. First elected in November 1962, he was elected nine times and served for 46 years in the U.S. Senate. At the time of his death, he was the second most senior member of the Senate, and the third-longest-serving senator in U.S. history. For many years the most prominent living member of the Kennedy family, he was the son of Joseph P. Kennedy, Sr., the youngest brother of President John F. Kennedy and Senator Robert F. Kennedy, both victims of assassinations, and the father of Congressman Patrick J. Kennedy.

About Robert Edwards Hunter (born 1940) is a Senior Advisor at the RAND Corporation, Arlington, Va. He was National Security Council Director of West European Affairs (1977-79), Director of Middle East Affairs (1979–81) and United States Ambassador to NATO (1993–98). He served on the White House staff under President Lyndon Johnson (1964-1965). He was President of the Atlantic Treaty Association, the umbrella organizaton for NATO’s 41 Atlantic Councils, headquartered in Brussels, Belgium, from 2003 to 2008, when he stood down and was replaced by German CDU MdB Dr Karl Lamers. He is Chairman of the Council for a Community of Democacies. He is a member of the Executive Committee of the Board of the American Academy of Diplomacy.

pictory: Edward (Ted) Kennedy on the US Hostage Crisis in Iran (1980)