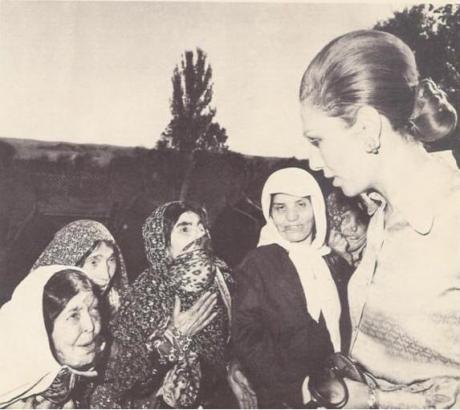 Shahbanou Farah visits fellow compatriots inflicted with leprosy which the government’s health ministery tried to combat through wide campaign of awareness and aid to victims. (circa 1970’s)

Leprosy (from the Greek lepi, meaning scales on a fish), or Hansen’s disease (HD), is a chronic disease caused by the bacteria Mycobacterium leprae and Mycobacterium lepromatosis.Leprosy is primarily a granulomatous disease of the peripheral nerves and mucosa of the upper respiratory tract; skin lesions are the primary external symptom. Left untreated, leprosy can be progressive, causing permanent damage to the skin, nerves, limbs and eyes. Leprosy does not directly cause body parts to fall off on their own accord; instead they become disfigured or autoamputated as a result of disease symptoms. Leprosy was once believed to be highly contagious and sexually transmitted, and was treated with mercury—all of which applied to syphilis which was first described in 1530. It is now thought that many early cases of leprosy could have been syphilis. Leprosy is in fact neither sexually transmitted nor is it highly infectious after treatment, as approximately 95% of people are naturally immune and sufferers are no longer infectious after as little as 2 weeks of treatment. However, before treatment was developed, leprosy was certainly contagious. More Here

ROYALTY AND THE PEOPLE: Farah Greeted affectionately by girls in Luristan Province (1975)

ROYALTY AND THE PEOPLE: Farah and Quashgai Kids (1976)

ROYALTY AND THE PEOPLE: Shah and Soraya Share meal with worksman’s family (1956)