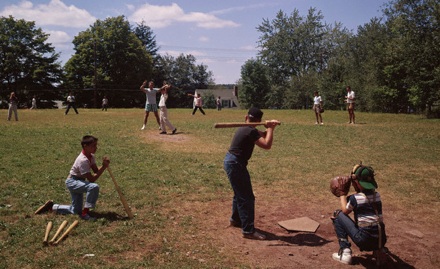 It wasn’t the game itself. I used to go down to the baseball fields near my house in the summers with my bat and a few balls, usually in the mornings when it was still cool and foggy. I wasn’t planning on trying out for any team. I didn’t even have a group of friends to get together for a game later in the day. But I liked the way the ball flew off my bat when I hit it right, and I was just trying to be a part of what was around me.

Around me were baseball fields and a town and America. I wasn’t trying to fit into an American story when I rode my bike holding my bat in one hand, but if I happened to fit into one on those mornings, that was all right. It was one way for my family to get to know America and its stories. They would be getting to know the part that had a boy coming back home and tossing his bat in the garage. And then later in the day I would go back out to the fields and watch the part that had men and women who worked for different companies play a joking, friendly game against each other. I wouldn’t know what to think. On the one hand, it was a bat and a ball and a field. On the other hand, they were adults, not kids. I would know what to think except that I might as well feel as glad for them as I did and as sorry for them as I did.

Either the world was very big or very small. I would watch the American men and women playing softball and think it was both. They were definitely part of a story, and it wasn’t just an American story. It was a human story. I didn’t think the light in the sky behind them would look so beautiful if it wasn’t a human story.

And it would seem very funny that somebody who was just getting to know American stories would already feel poetic and world-weary about them. I looked forward to being out there on the baseball field with them one day, and I didn’t think I could do it at all. “Hey there Billy, he just wants to end this game so he can have a beer afterwards.” I couldn’t wait till I was the one out there saying things like that and I felt like I could wait forever too.

Well, I would walk home and whatever it was that had felt so light and breezy at the baseball fields would be balanced out by something heavy and if not dark then at least dark-tinted in our house. I would lie down and think, those were grown men and women back there. Is that what I have to look forward to or not? There was something circular about it, being a kid and wanting to be an adult, and then being an adult and wanting to play a kid’s game. If there was something else to be in America, I didn’t know what it was. I knew there were other things to be in Iran. I knew a kid could already be running from the police for selling newspapers that the government didn’t like, and an adult could be going on hunger strikes in prison for it. At school I would hear stories about kids running from the police for writing on a wall or stealing cigarettes and how they would be punished by their parents, and I would think: My parents? My parents are the absolute least of my problems.

My father was never going to suggest that we take in a baseball game, but part of that was that he did not share one of the beliefs commonly held, or at least suggested, at baseball games: that the world was an easy enough place to take in a baseball game. He didn’t mind going outside and throwing the ball high in the air so I could practice catching pop flies, because that had a sense of wonder to it. Look at that, he’d think or say, a ball way up in the air like that. What great things we are capable of in this world!

And afterwards he would look at me and smile as if to say, that’s not so bad a thing to do when you’re a kid.

It was a while later that I figured out that he looked at me and smiled like that because he had been a boy running from the police for selling newspapers the government didn’t like. He was seeing the ease of boyhood for the first time. When I saw that, I thought, Okay, I can’t be who he was, but I can be great at who I am, and so there was no pop fly that was ever out of my reach. I would sprint great distances to go after balls that at first glance I had no chance of catching, but at the last second I would reach out my glove and there it would be. I might as well try to be great at the things a boy could do in America, I thought. To get a relationship going with the ball and the ground I would have to cover and the sky that the ball was set against. Those relationships seemed to go past being American or Iranian. My father would watch and I would see him thinking – there’s something to this, it’s not all just little kid games. He is learning about precision and accuracy and will, and those are useful things to learn in life. That’s what it looked like he was thinking at least.

And those things might find a place for themselves on joking, friendly baseball fields when I was a man like my father, but it didn’t feel like that was what I was practicing for. I didn’t have the first thing against those things coming out on those fields in general, and sometimes I would see a man make a great catch and I would think, there’s a guy after my own heart, but I liked the way my father looked at baseball even more than I liked the great catch, even though he had no idea how the game was played. He looked at it like he was working towards a world where anybody could play baseball if they wanted to.

He looked like he loved baseball more than the men and women down at the field, and I wanted to know about that. I wanted to know about loving something you didn’t know anything about. The truth was that those men and women would be joking and friendly, but in the next minute they might be arguing and swearing too. It was hard to love something the more you got to know about it sometimes. A ball and a bat and a field seemed like something everybody agreed on, but it was hard to keep that agreement going and play the game too.

I pretty much figured I wouldn’t have something like that in America, where I would love something that I was very much a part of too, until I stood on a pitcher’s mound and pitched the ball to American children, feeling a little bit like my father, only with a knowledge of how to pitch a ball too. I had America enough in my body when I did my windup, and so out there we could all concentrate on being human. That meant nobody laughing when a little kid came up to the plate holding the bat backwards and upside-down, or if they did, laughing with love. If they laughed with anything else, an Iranian man would correct American children with a look like his father had given him, and I would see them pause for a second because they knew that look was from far away and yet the way I was holding the ball was from right next door, and I would say to myself the conclusion I hoped they would reach: Yep, you can be anything you want to be.

You better start today though because it’s the hardest thing there is, and I would take my place on the mound and realize that I had found a place I had always been looking for, a place that was light and breezy on its surface and still made of the darkest and heaviest principles underneath, and the funny thing was how easily children could move in a place like that. A toss of a ball or a word about life might just as easily come their way. And I would notice that and think of how the one thing I knew to be true was that nobody knew how much room they had for whatever came their way until it did. Nobody in America knew how much they were waiting for an Iranian man to tell them what he knew of them, of life, and possibly least of all of baseball, until he told them. And then it would seem like the most natural thing there was.

In the meantime I could make sure that the children I was among could feel like anybody could play baseball if they wanted to, and that was a great feeling. It was a great feeling to be a man who knew the game telling them that the most important thing about baseball was whether or not anybody could play. That was when I felt like I was passing on baseball the way my father had passed baseball on to me, and we would have the whole story of baseball and a father and son playing catch, all that poetry stuff, we would have all that alongside an Iranian story of how it’s either going to be all of us or none of us and that’s the way it’s going to be, and fortunately we didn’t have any dictator we were yelling that at like my father had, just the world, just a world that wasn’t necessarily going to go along with that once we left the game and went out the schoolyard gate, but the funny thing was that we knew baseball, we knew the real baseball, and if anybody ever told us any different, well, they would be arguing with baseball, that’s all.