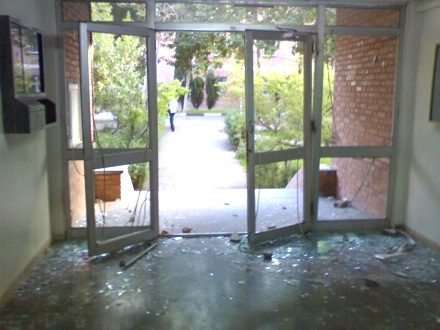 On 15 June 2009, riot police and militia attacked the University of Tehran student dormitory, causing extensive damage, injuring 150 students, and killing at least one. This was just the latest example of brutal repression by the governments in power as a response to civil rights activism at Iranian universities.

In the first prominent example of this repression, three students were shot dead in December 1953 after protests against the visit by then–vice president Nixon to Iran (this event occurred after the CIA-backed coup in August of that year, which overthrew a democratically elected government and reinstated the Shah). Similar repression occurred at Iranian universities in 1978. In 1999, after a peaceful demonstration protesting the banning of a pro-reform newspaper, several students were sentenced to death for provoking civil unrest (the sentence was commuted to 15 years imprisonment following domestic and international outcry).

The latest attack on Tehran University dormitory was followed by attacks on other universities such as Esfehan and Shiraz; arrested students remain in custody and information about those who were wounded or detained is unavailable. After about 4 months, Iranian authorities failed to identify and arrest the perpetrators of the attacks and leaving the issues in a haze of ambiguity. Recently, they expelled many students from Tehran Dormitory.

Over the past 4 years, Iran’s universities have grown increasingly unhappy with the rigid academic as well as social restrictions established by the fundamentalists who run the government. Iran’s university movement remains largely frustrated due to lack of leadership, and lack of support from the universities themselves (most senior officials of which are appointed by the government).

Iranian student and academic movements have been pessimistic as to the support they might hope for from Western colleagues. Western universities and international scholarly societies should grasp the opportunity to rebuild trust with their Iranian colleagues by expressing their solidarity and support for Iran’s universities and condemning the government’s violence against them. However, nothing is more important in the days and weeks ahead than for Western governments to refuse to recognize conservative and fundamentalist

Ahmadinejad as the next president of the Iran. If Western governments recognize him, as they did with the Shah, it will be a major setback to the current civil rights movement and lead to the further isolation of Iran’s scientists and academics. If the West shakes Ahmadinejad’s hand now, it will be decades before Iran’s scientists and students will be able to freely shake the hands of their counterparts in the West.