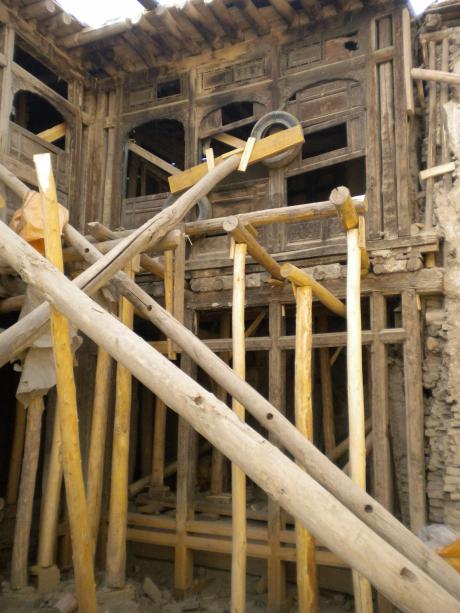 My alarm was set for 5:45 AM so that I would be ready for 6:45 when we all would be driven to work. I made my way to the kitchen at 6:15 to have breakfast. The big table was set with cereals, jam, honey,pomegranates, honeydew melons, bananas, apples, grapes, bread, milk and different kinds of juices. The cook had already finished his morning prayers and was preparing some pancakes for those who wanted some. For someone who normally has a cappuccino and an apple for breakfast, this was a big temptation. I had a bowl of cereals with milk and some bananas and finished off with some melon.

By 6:30 most of us were ready by the gate to sign out in the book and get into the van. There were 6 of us, as one of the architects had taken the day off for a long weekend in Dubai. That left me with one German and four British colleagues. One sat on the passenger seat by the driver and therest of us squeezed into the back of the van. That early in the morning the drive to work takes about 20 minutes. I had a clear schedule for the day. I was supposed to attend the morning meeting and then spend a couple of hours with each colleague on their projects.

The day went smoothly. I walked around the muddy construction site, wearing boots and a hard hat over of my ‘hijab’. As I climbed up and down very old steep stairs onto the rooftops and over scafoldings, my understanding of the scale of the undertaking grew in proportion to my respect for my colleagues.

Working on these projects is so much more than an architect’s job. These guys are not only designing the buildings and specifying materials, but they are also dealing with all structural issues, running and managing the construction site with labourers who cannot read and write, let alone read drawings, specifying and sourcing materials in a country where nothing is done through the internet or catalogues, instructing carpenters, stone masons and brick layers how to do things, and identifying their mistakes, designing, detailing and monitoring the fabrication of every little aspect of the building, ie. door and window jams, joist hangers, light fixtures, … you name it. And on top of all that, they are dealing with the community and all the politics involved in working in an extremely traditional community where hierarchies, tradition and formality are paramount, and where the default mode is to resist change at any cost.

By the end of the day, having enjoyed a bit of insight into each project, I was wondering if I could ever do what they are doing, especially since I have not been designing anything for the past 5 years. At the same time, if one wants to learn about building construction and development work, this is the place.

We got back to the fortress before the sunset and had acouple of hours to clean and rest before dinner. In the evening a few people decided to go out for some drinks. They asked if I wanted to join them. Curious to find out more about the people I might be working with and even more curious about life outside the fortress, I said I would love to.

A car was booked for 8:00 PM. I was told we would be going to a bar owned and run by an ex BBC reporter. There were four of us and the drive took about 20 minutes. In Kabul only the main roads are asphalted, all other streets are very rough dirt roads with many potholes. After another bumpy ride the car stopped in front of a solid metal gate. The street was dark and looked abandoned.

As the car pulled up for us to get out, a small door to the side of the gate opened. A guard wearing a rifle greeted us and stepped aside for us to get in. When we entered what looked like a driveway, he closed the door and we could see his colleague behind him. They frisked the guys, and using a flashlight asked to see inside our bags. Then they told us we could continue.

About six meters ahead, there was another solid metal door. Once we reached it, one of the guards behind us shouted something and the small door buzzed open. We all stepped into a brightly-lit tiny space of probably 1.2m by 1.8m. To one side there was a counter behind a glass protection, where another guard was waiting. The space was rather tight for four people so we still had the door behind us open. The security guard asked us if we had any guns or other weapons. When we said that we didn’t, he asked us to step in and close the door behind us. He said otherwise he could not open the other door to let us through. When we complied, he buzzed the other door open and we stepped into a lush garden where a walkway was illuminated by a number of spotlights. At the end of the pathway we took a set of steps to the side of the guesthouse down to a basement space.

The low ceiling, softly lit space, was painted in dark red and was furnished with a bar counter and a number of worn upholstered sofas. The walls were decorated with framed caricatures of various politicians and world figures indicating the interests of the owner. The atmosphere was surreal as it felt like we had just entered a typical London pub hidden behind tight security in the middle of Kabul. Most of the patrons were either British or from other European countries. Some of them were puffing away on their cigarettes. I had forgotten how smoky bars and pubs could get.

As the night was still young, we managed to get a table in front of Stalin. While sipping on drinks we began chatting about life in Kabul and our past adventures. A couple of hours later, long before our midnight curfew, we were all completely unwound ready to go back to the compound . We called for the driver.

When we were leaving, two Americans were coming through the second security door. As I was waiting for them to come through and clear the way, I saw them each take a gun out from inside their jackets and hand it to the guard behind the glass. They were handling those life-ending tools so naturally. The guard put the weapons in a locker behind him and buzzed them through. I had never seen a gun up close, and never expected to see one on a social outing. It felt disturbing.

On the way back, I could not stop thinking about those men and their weapons. My colleague must have noticed I was quiet. Referring to my day on the site, he jokingly said, ‘You know, you are starting to develop a reputation already going through so many men in one day.” I laughed and replied, ‘I wonder what it says about the men?’

By the time we arrived at the Qala, I had forgotten the guns. I slept well that night.