Forget Ahmadinejad or the weddings off!! 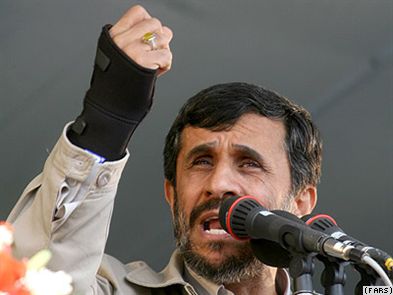 I found this article today and thought it was a sign of the times!

I copied and pasted from Radio Free Europe Radio Liberty as Im not sure if the link will work.

Blogger Iran Azad (Free Iran) writes about how his friend, a supporter of Mahmud Ahmadinejad, was rejected by a girl he wanted to marry because of his loyalty to the Iranian president.

One of my acquaintances, a supporter of Mahmud Ahmadinejad, ran into me in the neighborhood and wanted to share his problems with me. At first, he complained about my green shirt and my persistent support for Mir Hossein Musavi.

Later on, when he was able to fully open up to me, he spoke of his recent courting ceremonies, one of which is very important. As he is a religious and persistent follower of the supreme leader, he was looking for a girl who would accept his proposal with a dowry of 14 gold coins. I kept on telling him that times have changed and he wouldn’t find anyone of that sort, that he ought to change his perspective… He never listened and argued on the basis of his own beliefs (no offense to his beliefs).

But interestingly he came to an agreement with the daughter of a family on the dowry and marriage arrangements, although he was struck by a strange condition put forth by the girl. The girl, who also was a religious revolutionary girl, and met the expectations of the Basij fellow, puts forth the following conditions: firstly, he ought to forget the clergy (she said she only accepted a couple of them, no names were mentioned) and secondly he ought to forget about Ahmadinejad as well, and not so much as talk about him.

This Basij kid — who thought he had found the perfect match for himself and the girl who met all his expectations — was struck to his very insides and asked what Ahmadinejad had to do with their lives….

Poor fellow, you can’t imagine his condition when he told me about this. He had never even thought about it, and one of the most religious and respectable girls he knew put forth “forgetting about Ahmadinejad” as a condition for marriage.

Now it was my turn to try and give him some advice, but when will he listen to it?

But I think the girl has taught him a good lesson; she gave her enough guidance for a whole lifetime. I wish you success, my sister.