Kabul Diaries: conversation with an ex-soldier 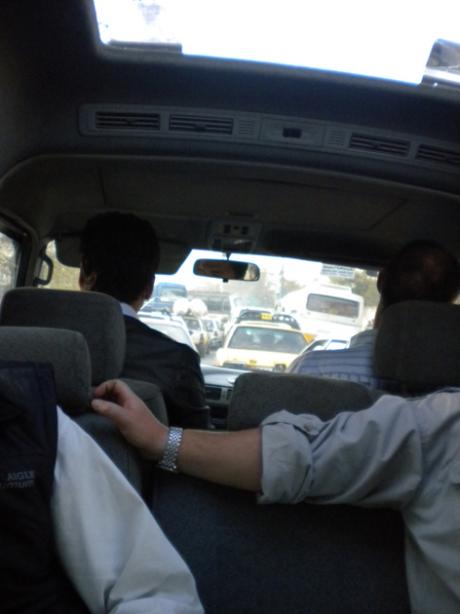 The drive back from the old city always took a lot longer in the evenings because of the traffic jam. The high number of vehicles, drivers who tried to turn two-lane streets into four lanes by sheer force and sharing the roads with hundreds of pedestrians, meant that a stretch which normally should have taken 20 minutes, took three times as long. On this particular evening, the worse than usual smog made breathing difficult and left a nasty taste of gas fumes in my mouth.

As soon as we arrived in the Qala and I dropped off my stuff in my room, I made my way to the kitchen to get some tea and fruit to help change the bitter aftertaste. The low ceilinged, warmly lit kitchen was a cozy space furnished with a long table in the middle, windows which opened into the courtyard and shelving units lining the wall on the other side. This was where Kaka Mustafa prepared the evening meals.

Often I enjoyed sitting in a corner watching him as he drained the big pots of rice or chopped vegetables for the soup, while I asked him questions and tried to follow his Dari. On this day, I had some specific questions I wanted to ask him. Dr. Abdullah, the presidential candidate who was challenging the incumbent Karzai, had apparently announced that afternoon that he would no longer participate in the run-off elections, which were due to take place in a few days time because, he claimed, the system was corrupt and he had no faith in it. I wanted to ask Kaka Mustafa what he thought about the announcement and the elections in general.

I entered the vestibule and opened the small door to the kitchen. A pleasantly warm breeze stroked my cheeks and the delicious smell of the lamb stew simmering on the stove greeted me. Kaka Mustafa had cleaned and washed the rice and was sitting on a stool in the corner of the kitchen deep in thought. As soon as he saw me, he flashed a big smile and got up to greet me. I said ‘Salaam, Chitor hastid? Jour hastid? Mandena bashid!’ (Peace be with you, How are you? Are you well? May you not be tired!). I pleaded with him to sit back down and made my way to the shelves to pick up a mug and a tea bag before I walked over to the stove. Kaka Mustafa, rushed forward and picked up the heavy kettle with his big strong hands and said, ‘Let me do it. It is heavy, you will burn yourself.’ I held up my cup as he poured hot water over my green tea. I thanked him and sat down at the corner of the long table. He walked over to the other side of the stove, picked up a small tin box of crushed golapar (Persian Hogweed) and put a pinch in my mug. I smiled and thanked him. This was a secret he had just recently let me in on; the golpar prevents the green tea from getting bitter.

Kaka Mustafa was a Shiite Tajik. He was of medium height and a stocky build. He wore a short black beard, which matched the colour of his hair. The deep wrinkles around his eyes reflected traces of a difficult life beyond his age. He was probably in his late 50s. When he was younger, Kaka Mustafa used to be a soldier, but in his middle age he earned a living much more peacefully as a cook.

I put my tea on the table to cool off a bit. I picked up a small bowl and began to seed some pomegranates. He sat down and watched me as he asked how my day had been. I told him about my brief tour of the bazaar across the Kabul River that afternoon. One of the locals from the old city had accompanied me, as I needed to get a clearer picture of the neighbourhood beyond the immediate quarter where we worked. After a few light exchanges I turned to what really preoccupied my mind.

‘Have you heard about Dr Abdullah’s announcement today? What do you think about it?’ I said. ‘Yes, the situations is not good. God knows what will happen.’ he replied. I continued, ‘What do you really think of the elections Kaka Mustafa, do you believe they were rigged?’ He let out a sigh and said, ‘Dokhtaram, (my daughter) they are all thieves. Karzai is surrounded with a bunch of thieves. Everybody in Afghanistan knows that, but I think it is a good thing Abdullah decided to finally give up. If Karzai lost the elections, it would lead to a bloodbath in Afghanistan. The Pashtoons would never accept a president who is not one of them.’ I had heard this before from several other Afghans during the past week.

I probed further, ‘But what do you think of Abdulah himself?’ He said, ‘They are all after their own interests. They all want to pocket the billions that are dumped into Afghanistan. Abdullah is no different. They all want power for themselves. Nobody has the interest of the people at heart. Besides, Abdullah had his chance during the Mujahedin era. These people massacred the Hazaras. They did to their hamvatans (compatriots), what even Yazid didn’t do to Imam Hussein and 72 tan.’ He was referring to the grandson of Prophet Muhammad who was killed together with 72 members of his family and his followers in Karbala. For Shiites the battle of Karbala still signifies one of the most unimaginable gruesome cowardly ways of killing the innocent. I looked up at him questioningly. He continued, ‘At least Yazid did not violate their namous (honour), these people raped and violated the wives and daughters of their compatriots before they killed them. No, the Afghan people never forget!’

I had known that the last three decades in Afghanistan had been very bloody, but I could not have imagined the extent nor the depth of the wounds. Kaka Mustafa had become very animated when talking about the Mujahedin. I wondered how long it would take for these wounds to heal. Moving the conversation back to the elections, I said, ‘So you think Abdullah did the right thing by withdrawing?’ He replied, ‘Yes, he did the right thing for Afghanistan. For now it is best if Karzai remained president. It was also a wise move by Abdullah, because now nobody can claim that he lost the elections. Who knows maybe they have promised him an important position in Karzai’s government if he backed off.’ This was another rumour, which had spread like wild fire since the afternoon. Just beginning to gain glimpses of the complexity of the political, ethnic and sectarian divisions of the country, I asked, ‘What, in your opinion, does Afghanistan need, to help it progress?’ He didn’t take long, before he replied, ‘Afghanistan needs a government that unites the people. Up until now the only thing that has managed to unite us has been a common enemy. We are good at uniting to fight when our land is invaded. We need to be united when we are not invaded.’ I let his words sink in before I asked, ‘Can the foreigners help? What can the kharejis do to help?’ ‘The kharegis can help by helping us create jobs, and they can help by helping us build up our country.’

To me his assessment of the needs of his country seemed unbelievably sober and his expectations from the foreigners seemed not too far fetched. Helping build infrastructure and creating jobs are infinitely easier than building a nation and creating democracies in foreign cultures. His answer seemed to indicate that he understood there were certain things only Afghans could do, while there were other things with which they needed a lot of help from the outside. I wondered why the most sophisticated Western politicians are unable to understand what even a ‘simple’ Afghan soldier seems to understand. Our conversation was interrupted as Jack and Mike came into the kitchen looking for me. We had agreed to go out for a curry dinner that night. I told them, I needed a few minutes and would meet them by the gate.

I got up to put my dishes in the sink and make my way to my room to get ready. Kaka Musafa asked, ‘Are you going out?’ I told him about our plans. He said, ‘Can I ask you not to go out tonight? It is not safe. Many Afghans are staying home. Abdullah only made the announcement this afternoon. It is best to wait tonight and tomorrow to see what will happen. You can always go out in a couple of days.’

The fact that a mere announcement by a public figure can make a nation nervous to the extent that they decide to stay home, might be difficult for me to fully comprehend, but I could sense a real worry in his voice. I told him I would cancel my plans. Just as I was leaving the kitchen, I couldn’t resist asking him the question that had been lingering on my mind, ‘Did you lose many family members during the war?’ He was surprised by my question. ‘I lost a daughter. She died under the rubble. She would have been your age by now.’ He said. Stepping out of the kitchen I said, ‘Khoda biyamorzadesh!’ (May she rest in peace!)

We stayed home that night.