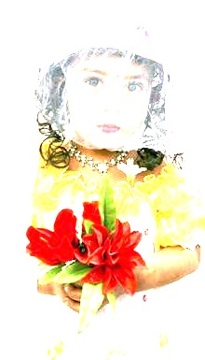 The best day of my life was when mom bought me the Princess Saba in her long white dress covered with thousands of colorful tinsels. Her lush blonde hair falling over her chest was so shiny that when in stared at them it was like staring into the sun. Her eyes were blue, the type that open and close. Every day I combed her hair, I touch her breasts hoping one day mine would grow like them. My only wish was to become a bride just like the Princess with blonde hair, blue eyes, red lips and white gown.

Princess Saba always slept in my bed. As soon as she laid her head on the pillow, her eyes closed and she went to a deep sleep like a Princess as she was. She never woke by the barking stray dogs in the streets or by the roaring thunder. Unlike her I was scared of both vicious dogs outside and the horrific sound of thunder and worse than all I was I was so terrified of Mohsen, the gigantic boy who lived in our neighborhood, two streets behind us. Whenever he found me alone, he rushed and grabbed me tight, groped me and sneered, “I finally got you.” And as soon as I burst in tears and screamed, he let go of me and ran away.

One day that I was really had it with him, I went to my mom crying, “this…, this boy…” She didn’t let me finish, slapped me hard in the face and said, “Don’t you ever play with boys again, you stupid girl.”

But Mohsen would never leave me alone. Every evening that I got out of the house to buy bread, he was waiting for me in a dark corner in the street to grab me and touch me. He was always there with me even at nights and in the sleep.

One night I saw him running after me. I tried to escape but I couldn’t, my legs were locked together.  He reached me, locked me in his arms and touched my entire body as much as he wanted. I was desperately panting and sobbing but I could not release myself. I screamed and woke in sweat. As soon as my eyes got used to the darkness, on the other end of the bedroom, I saw my mom locked under my father moaning just like me in my nightmare. Poor mom couldn’t escape either. Maybe it wasn’t my dad bothering her maybe it was Mohsen who was now touching my mom. I was so scared but I kept quiet. I wet myself but I hid under the blanket and didn’t make a move. I was afraid he’d come back to me if he found out I was awake.  Princess was steel calmly sleeping in my arms unaware of my terror. I opened her eyes a time or two but they would close again. Oh I hate that bastard. I wished one day that he came to me I’d turn into a venomous snake and bite him seven or eight times so he turns blue, his mouth foam, he collapses and die.

A few years have passed from those days. My breasts are growing bigger by the day and their tips are getting harder. Lady Sakineh, the bathhouse administrator told my mom that Mrs. Eshrat wants me for his son. My father hasn’t seen the boy yet but he agrees. He told my mother the other day, “our daughter is fifteen now. It’s time for her to go to the husband’s house. This boy is just fine, he’s from a good family.”