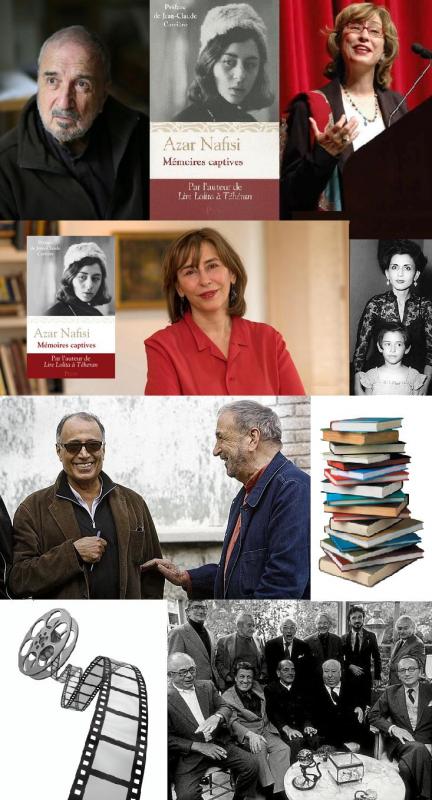 Azar Nafisi’s 2nd novel “Things I have been Silent About” has been published in French under the title Mémoires Captives with an introduction by one of the most prestigious French intellectuals: Jean Claude Carrière, film critic and screenwriter to major French films. Hamid Dabashi ( a Vocal Critic of Nafisi whom he accused of being a neo con and Pro War sympathizer) Eat Your Heart Out ! LOL

Carrière is Married to Nahal Tajadod Iranian writer, Scholar and Researcher specialist of Persian Poet Rumi and Chinese civilization with whom he has a small daughter. Author of a book on Kiarostami, Carriere is an ecclectic man whose prolific carreer in the Arts of Theater and Cinema are internationally acknowledged through his works with Spanish director Luis Buñuel or British avant garde theater director Peter Brook with whom he worked on the adaptation of Persian Sufi Poet Farid ud-Din Attar  Conference of the Birds at the Shiraz International Arts Festival in the 1970’s. He was the Founder and director of The Prestigious French Film School La Femis. ( In above photo notice the young bearded Carriere in the historic photo gathering of the most notable film directors of the century ranging from Alfred Hitchcock, Luis Buñuel, Billy Wilder, George Cukor, Jean-Claude Carrière, Rouben Mamoulian, Robert Mulligan, George Stevens, Robert Wise, William Wyler

Jean-Claude Carrière (born 17 September 1931, Colombières-sur-Orb, Hérault, France) is an award-winning screenwriter and actor. Alumnus of the École normale supérieure de Saint-Cloud, he was a frequent collaborator with Luis Buñuel. He was president of La Fémis, the French state film school. r

His collaboration with Buñuel began with the film Diary of a Chambermaid (1964), for which he co-wrote the screenplay (with Buñuel) and also played the part of a village priest. Carrière and the director would collaborate on the scripts of nearly all Buñuel’s later films, including Belle de Jour (1967), The Discreet Charm of the Bourgeoisie (1972), The Phantom of Liberty (1974), That Obscure Object of Desire (1977) and The Milky Way (1969).

Azar Nafisi (born circa 1955) is a Iranian born professor and writer who currently lives in the United States. Nafisi gained fame in 2003, with her book Reading Lolita in Tehran: a Memory in Books.

Ms. Nafisi was an English literature professor at a university in Tehran. Having witnessed the Iranian revolution and consequential rise to power of Ayatollah Komeini, Nafisi grew tired of the rules posted upon women by her country’s rulers. Nafisi had visited the United States several times before the revolution, and she appreciated the freedoms that women in other countries had. She felt that she wasn’t her true self when she had to go to class every day wearing a veil, and sometimes, she would show a hint of hair or kiss a male student on the cheek (something strictly forbidden by Iran’s hard-line government), just to feel that, inside, she was still the same person.

Because of her discomfort with the laws established towards Iranian women after the revolution, she quit teaching in college during 1995, going on to do what would be considered by many to be a daring move: After quitting her job, she invited seven of her best female students to secretly attend regular meetings at her house, every Thursday morning. They would study such books as Lolita and Madame Bovary, literary works considered controversial and even dangerous to read in Iranian society. In addition to that, she would encourage her seven female readers to bring westernized clothing underneath their veils, and they would put on make-up during the meetings.

Nafisi fled Iran in 1997, moving to the United States, where she wrote Reading Lolita.., a book where she shares her experiences as a woman in Iran. In the book, she declared I left Iran, but Iran did not leave me.