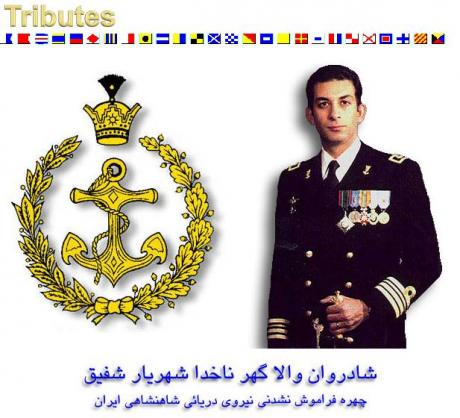 Shahryar Shafiq was an Imperial Iranian Navy Captain, and the only member of the Pahlavi Dynasty who chose a military career. After the victory of the Islamic Revolution in February 1979, he was the only member of Dynasty to stay inside Iran and keep fighting against the Islamic revolutionaries, up to the point when he had to flee in a small boat from the Persian Gulf to Kuwait, under heavy fire.

In 1967, he married Maryam Eghbal, daughter of Manouchehr Eghbal, who was earlier married to one of his uncles, a half-brother of the Shah. They had two sons: HH Prince Nader Shafiq (born 15 March 1968) and HH Prince Dara Shafiq (born 1970).

After exile, he joined his family in Paris, France and began organizing a resistance movement inside Iran. He was assassinated in Paris on December 7, 1979, being shot twice in the head on the Rue Pergolese[

Dialogue of murder: A cautionary tale that must not be forgotten By Cyrus KADIVAR