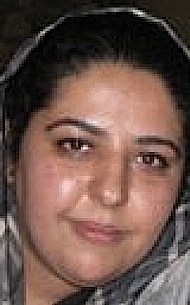 Mehrnoosh Etemadi, an activist in the One Million Signatures Campaign in Isfahan was arrested on November 23, in her home. Following her arrest Hayedeh Tabesh, another activist in the Campaign in Isfahan was arrested on December 5. Both women’s rights defenders are charged in relation to their activities in defense of women’s rights and the Campaign.

Write Mehrnoosh. Write on the interrogation forms marked with “Truth is Your Salvation.” Perhaps this time, if you are truly honest, they will set you free. Write my sister. Write that we were a few women, who dreamed of an equal world, a more feminine world. Write that we could no longer tolerate the insults and injuries resulting from discrimination. Write that we believe a better world is only possible through equality. Write that we had dreams. A dream that we no longer witness women who flee, women who are destitute, women who suffer, and women who are broken by the belittlement of our sex and gender. Fill those pieces of paper marked with “Truth is Your Salvation” with the life stories of the women who have participated in your workshops on preventing domestic violence, whose bruised bodies and crushed spirits you witnessed. Write about women who suffered and tolerated it all and write about us, about all of us, who suffered, but decided that we would no longer bear it. Write on the interrogation forms, fill them all with names.

Do you know Mehrnoosh, how many names you will have to write for the investigations to be complete? You have to go back one hundred years. You have to write the names precisely and completely, because the “Truth is Your Salvation.” Write that we were the very ones, who a hundred years ago in this very city, in the city of Isfahan, were attacked and stoned, because we wanted schools and an education for ourselves and our daughters. Tell them that today your daughters can go to school, that they are educated. And you imprison us instead—the daughters of those very mothers, who fought for the education of your daughters— and you do not allow us any visitors, so that we cannot demand laws based in equality for our sisters and our daughters, so that we cannot demand a secure future or a safe and secure home. Write and move forward in time, till you reach the present. Write all our names, one by one, on those interrogation forms. As you sit on the chair facing the wall, write about our dreams and our hopes. Write about the excitement with which we collect signatures for our petition. Write about how hard we work to get these signatures. Write about the hope that fills the watchful eyes of the women of this land. Hope for improvement, hope for change—change for equality.

You have not forgotten our names, have you? We are tens, no hundreds of women. We are all filled with hope and we wear steal shoes. Do you remember us?! Recall the days when we fought for our right to vote, and in so doing we flung ourselves in front of the King’s horse and carriage, and tied ourselves to the gates of the Parliament. Recall those days and move forward in time, all the way to the present, when we are prisoners, but still hopeful. Write that being a woman means that we have to build slowly and we have to restore, step by step in order to move forward. Write that we are 18, 30 and 60 years old, that in Russia we are “problematic,” that in Africa we endure violence and are circumcised, that in Iran on a daily basis we fall victim to the violence of a law that was never written for us, and that all over this patriarchal world we are the second sex! But, still there exists thousands and thousands of units of energy within our being. Write that we seek a legacy for our girls and boys, which promises “eternal salvation,” which breeds life and is everlasting.

Fill those interrogation forms, my dear sister! I know that it will take hours. Write about the women in Zahedan who have raised their children and sent them toward their death, to fight in wars intent on protecting lands to which these mothers have no claim, as they are merely women. Write about thirteen year old brides. And don’t forget to tell them about the family courts, my dear sister. I know that you know each one of them, that you have climbed their steps many times, as you accompanied women from your violence workshops in their search for justice. Write about the worry and sleeplessness of mothers who have lost their children through the force of the law and write about their depressed faces and their listless eyes. Write that the stories of our grandmothers are filled with tales of captivity and unfulfilled desires, all of which have been multiplied in our spirits. “Truth is your Salvation” means exactly this! I don’t know why they tell your mother that you are not cooperating? Have you forgotten our restless history, or have you just chosen to be silent in the face of those who refuse to hear our cries for change? Write, as the spiritual essence of all these women is with you. All these women, some of whom have been imprisoned all their lives and some who sit in homes which at any moment can turn into prisons, their breath is tied to yours and in the hearts they nurture their hope for you.