To Live and Let Die 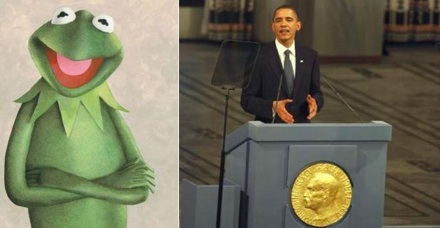 In Oslo, Obama made a passing reference to “hundreds of thousands who have marched silently through the streets of Iran”, while accepting his Nobel prize for peace.

Meanwhile, on Minnesota Public Radio show In The Loop, presenter Jeff Horwich strummed on the guitar while Kermit sang It’s Not East Being (A) Green (Revolutionary):

“Spend each day on the run from the basij… Plain clothes police, they’ll run you over, drag you off to Evin or maybe just beat you in the street with electric batons… Burning pictures of the leader… Green’s getting madder and gutsier each day.”

Perhaps it’s not surprising that Kermit’s stance on the Islamic Republic is tougher than the US president’s: critics consider him a Muppet despite promises of a change from George Bush.

In January Obama invited the Islamic Republic to “unclench its fist”, something it has so far has failed to do. This is despite the olive branch extended to Khamenei & Co in March – the president recorded a special message to mark the Iranian New Year. He said he “would like to speak directly to the people and leaders of the Islamic Republic of Iran”.

Naturally, we put him on hold. He’d ignored the crucial “us” and “them” divide in Iran, between the regime and the people. (On the anniversary of the US embassy siege in November, demonstrators chanted an ultimatum: “Obama, you are either with us or with them” – “Obama, yabama-ee, yab-oona”.)

After a summer of crackdowns, Obama set out to reassure Islamic Republic. “We do not interfere in Iran’s internal affairs,” he said.

The same president had admitted to finding the footage of 26-year-old demonstrator Neda Agha-Soltan’s death “heartbreaking.” He added: “Anyone who sees it knows that there’s something fundamentally unjust about that.

“I have concerns about how peaceful demonstrators and people who want their votes counted may be stifled from expressing those concerns.

“It’s important for us to make sure that we let the Iranian people know that we are watching what’s happening, that they are not alone in this process.”

That Obama might be glued to YouTube delivered no discernible morale boost to Iran’s green movement; nor did the fact that he considered Neda’s murder ‘unjust’. For him, change in Iran was a matter of faith: “We have to believe that justice will prevail.”

Justice, of course, remains elusive. Ms Agha Soltan may be number two in Time magazine’s Top 10 Heroes of 2009 but this is little consolation when Washington’s Nobel peace laureate remains reluctant to back the cause she died for. (No need for 30,000 troops, just a few words: Yes you can.)

In his Norouz message, Obama said: “The United States wants the Islamic Republic of Iran to take its rightful place in the community of nations.” This is at odds with the objective of bringing democracy to Iran – after all, demonstrators have called for an “Iranic republic” and pictures of Khomeini and Khamenei have been torn up and stamped on.

Meanwhile, an online campaign is growing in support of Majid Tavakoli, the student leader from Amir Kabir University who has been arrested, forced to dress in hejab, and accused of trying to escape dressed as a woman. Men are posting pictures of themselves wearing headscarves in solidarity with Tavakoli.

Obama should take lessons in humour with an edge from both them and Kermit the Frog. As for negotiating with the mullahs, send in Miss Piggy.