All eyes on Neda 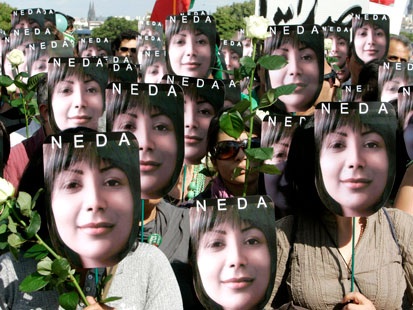 What does Neda Agha-Soltan, listed by Time magazine as one of 2009’s ‘25 people who mattered’, have in common with Saddam Hussein? One angel, the other devil, both died YouTube deaths, etched into the memories of millions.

When Tony Blair told the BBC last week that, WMD aside, he was glad Saddam and his sons were no longer in power, I wondered what he felt about the dictator having been executed (the last person to be hanged in Britain was in 1964 and the death penalty has since been abolished). Did he watch? Was he pleased that our enemy was hanged in that dingy cellar, much as many of Saddam’s victims will have met their deaths.

Far from squealing for mercy, the humiliated middle-eastern despot saw off taunts from his executioners – perhaps his experience in killing people had taught him how to act when it was his own neck in the noose.

There was not a peep from Blair about the killing, as his subordinates limply stated that this was the justice that the Iraqis chose to dispense – not us. The important thing, Blair reminds us, is that the Middle East is a better place, especially with him there as a peace envoy.

Neda Agha-Soltan’s death also raised questions – obvious ones, such as how even a brutal regime could be so brutal. But others, too – how many of the hundreds of thousands who have watched her last moments did so more than once? Is it voyeurism? At what point does it become entertainment? And given that Ms Agha-Soltan signed no release form, is it right that footage of her death was posted on YouTube in the first place? Is it not enough to know that someone has been killed? Do we have to see it? Given the choice, might any of us not choose to prevent the world from gawping at our body as we breathed our last?

The final frame of that video, with blood crisscrossing Ms Agha Soltan’s face, is freely reproduced. It has even been turned into a logo. Her death has been re-enacted – first by anti-Islamic Republic demonstrators in New York (in what seemed like a YouTube mourning ritual, as if trying to make sense of their relationship with technology) and secondly in Iran by pro-regime goons, portraying Ms Agha-Soltan as a tool of UK-meddling in Iran’s affairs, in what was a macabre and tasteless piece of street theatre…

In life, many of us go to pains to look good; yet in death we are deprived of the right to own our own image and story. “Neda” is, anyway. Who knows if she’d have objected to the footage of her last moments being released. Our familiarity with her would then be limited to a news report of a 27-year-old tragically killed by a criminal state.

Unlike Saddam, Ms Agha Soltan owes her fame exclusively to YouTube and other online outlets. He was a brutal dictator. She was killed by one, shot on camera, and is an icon as a result. We feel entitled to doctor and use her image at will, allowing empathy to override rationality – saying “We are all Neda” gives us the authority to remember her as we choose: bloodied, like so many others, confirming our justified outrage against the Islamic Republic.

We do not know her favourite colour, what ice cream she liked, whether she was a tea or coffee drinker; yet “We are all Neda” because we’ve seen her die on YouTube.

As Time’s Bobby Ghosh put its: “We’ll never know the man who stood in front of those tanks in Tiananmen Square, but we do know Neda Agha-Soltan: we’ve looked into her eyes…

“Within hours, millions of people around the world had been beseeched by those fading eyes, making an intimate connection.”

This implies reciprocity – as if Ms Agha-Soltan’s image could return a gaze.

Accompanying these words is a still from the YouTube video, hands pumping her chest but, mercifully, no blood. In a world dominated by Ayatollahs, Blairs and Saddams, we should remember Neda Agha-Soltan, surely, for her happy, smiling face. After all, one day before her death, none of us knew who she was.