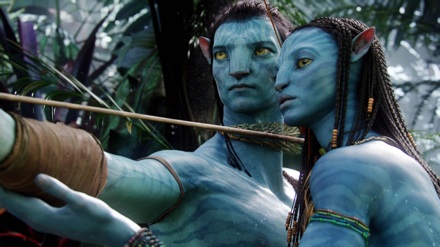 Last night I really wanted to go see Quentin Tarantino’s Inglorious Bastards which was playing in one of the theaters here in Chihuahua, Mexico. But it was too late, it had been replaced. My nephew Teo and I went online to see what else is showing. I saw James Cameron’s Avatar in IMAX digital 3D listed on the very top.

Hollywood action movies have disappointed me too many times. Too much death and destruction, POINTLESS death and destruction. And I didn’t like Cameron’s last movie, Titanic, which I thought was a giant sinking cheese. Plus the trailers for Avatar had not impressed me.

So now I had to convince myself, my cool cynical 17-year-old nephew who gets turned off by hype, and my sister who only likes to see romantic (chick) flicks.

“I heard Avatar is supposed to be really good,” I lied. I had not read any reviews.

“I’m not gonna see no ‘Avatar’… sheeesh!” my sister yelled from her bedroom.

“Just come with us!” I yelled back, begging.

The only one who was excited was my younger nephew, Robert, who’s ten. He always says yes to any activity outside the house. Three days ago I asked him if he wanted to come watch me get a haircut. He quickly jumped into the car.

Well, I’m happy, thrilled in fact, that Avatar won over all of us. It’s a spectacular film in every aspect. The visual effects are amazing. The acting is very good. And there’s plenty of action. Yes, lots of death and destruction, but far from pointless.

What separates this film from most other action movies is that the story will grab you much more than the special effects. On the surface it’s about corporate greed and gung-ho militarism. But in a deeper sense, it’s David vs. Goliath that every human being can relate to.

I sometimes thought I was watching Basiji thugs attacking defenseless protesters. Then I imagined Israelis crushing Palestinians. And Nazis exterminating Jews. And Janjaweed massacres in Darfur. And Apartheid in South Africa. And of course Americans in Vietnam, Iraq and Afghanistan punishing entire nations for “strategic” reasons. It can’t be an accident that the bad guys in this film are ex-Marines working for a company that wants to mine a precious mineral on land populated by “savage” natives. In fact it looks a lot like cowboys vs. Indians.

You might interpret Avatar differently. But you will have great sympathy for the weak. Well, not all of you. Some of you will say, “What’s the big deal? They’re just savages. Fuck ’em.”

Avatar is up there among the best films I’ve ever seen. A masterpiece.