Mushroom in the Sand 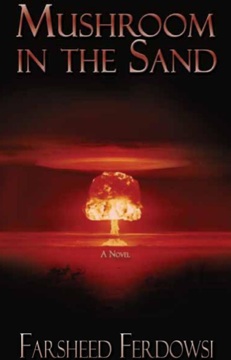 Excerpt from the new novel from Farsheed Ferdowsi, Mushroom In The Sand – an international action/thriller/spy novel with Iran’s clandestine nuclear weapons program as a backdrop. The book is on sale now. See the trailer on YouTube and learn more at MushroomInTheSand.com.

Lying on his side with his left arm over a large pillow, Ross stared at the amber glow of the alarm clock as the digits declared 2:47 am. It had been a sleepless night. At times, he felt angry at the clock for not moving faster. Maybe it’s stuck. The thought had occurred to him more than once. Then, as if the device could sense his desperation, it would dole out another minute, causing him to rejoice. But his relief would be short-lived, as the agony of waiting would quickly return. The appointed hour was inching closer.

Oksana was fast asleep on her side of the king-size bed. Surrounded by pillows, wearing an eye mask, and drowning all ambient noise in the whooshing sound of her noisemaker, she was dead to the world. He had listened to that machine for so long that it somehow sounded natural to him.

Ross quietly rose and sat on the edge of the bed. He felt exhausted. As he arched his back to stretch, his glance fell on Oksana. Her silhouette, in a long satin nightgown, was barely visible in the starlight. For a moment, he felt guilty. Danger loomed near, but she was in the dark. He had weighed the pros and cons of confiding in her time and again. And on every occasion, he had arrived at the same conclusion: it was better this way—at least for now.

I wonder if they can see us in the bedroom, he thought. With these people, anything’s possible.

For twenty-five eventful years, Oksana had stood by his side. Her love for him was unconditional, as was his for her. Together they had weathered many storms, raised a beautiful family, and managed to develop stellar careers despite the obstacles that are part and parcel of being foreign-born citizens living in America. They had made it.

At seventeen, their daughter Marina was a delightful and serious teenager, methodically narrowing her list of university options. She was named after Oksana’s grandmother, who had been a seamstress in the court of the last Russian Tsar, Nicolas II. A cross between her Caucasian mother and her Middle Eastern father, Marina was a stunning beauty and, like most daughters, she had a mystical grip on Ross’ emotions that he could not explain.

Victor, fourteen, was a dashing young man with features that favored Ross more than Oksana. This pleased Ross greatly. To him, watching Victor grow up held a twinge of déjà vu. He loved to tinker and build model airplanes, much as Ross had in his teens. As a scientist, Ross saw in his son the continuation of his own life: an engineer in the making. And in spite of his sarcastic accusations to the contrary, Ross loved Victor no less than he did Marina.

They framed his existence.

Ross peered out of his second-floor bedroom window. The house on the other side of Gordon Street was completely dark. The Millers used to leave their porch light burning all night, but not the new tenants. Why did the Millers leave so abruptly? Ross wondered. And why rent a fully furnished house to three single men? The Millers didn’t know these people nor did they need the money. It makes no sense. How were they talked into this? He shook his head. They must have been made an “offer they couldn’t refuse.”

Oksana was mystified by the three men; they were secretive and clearly out of place in a family neighborhood. Not Ross. He suspected who they were: Iranian agents, sent by MOIS—the Ministry of Intelligence and Security—to watch him.

Are they training invisible laser beams at our windowpanes to eavesdrop on our conversations? Ross thought. Are they using heat sensors to monitor our movements inside our home? Maybe they’re using old-fashioned binoculars, bugs, and wiretaps? Ross had no way of knowing, but he assumed the worst. He felt their presence like one does a nagging rash. And it angered him.

3:02 am—he put on his black jogging suit and stepped into a pair of loafers. Careful not to make any sound, he picked up his Oakland Raiders cap from the nightstand and tiptoed out of the bedroom.

He donned the cap as he crept down the stairs. Passing Victor’s bedroom, Ross sneaked a peek. The boy was asleep on his stomach hugging a stuffed blue rabbit. Ross smiled, thinking, Habits are hard to break.

Standing in the middle of the kitchen tilting his head, Romeo greeted him with an inquisitive stare. Ross was never more grateful for the Shih Tzu being one of the quietest breed of dogs than he was at that moment. When he knelt to scratch Romeo’s head, he laid on his back waving his paws in the air, begging him to rub his belly.

Fear was all that Ross had known since the “message” had been delivered to him three days earlier. The horror it induced into his core was such that it rendered his many attempts at distraction useless.

Men are creatures of habit, and Ross was no exception. His Saturday routine began at dawn when he would drive across the Golden Gate Bridge, park on West Crissy, and set out for a five-mile run on the promenade. He usually finished the course in about forty-five minutes.

During his last jog, the morning chill felt particularly exhilarating to Ross. He loved the Bay Area, especially San Francisco. He found the scenery breathtaking. While he ran, he took in the reflection of the first light on Alcatraz as it glowed majestically against the white of the morning fog. It was poor visibility. When he approached the end of the pier, he noticed the silhouette of a burly man leaning against the rails. He seemed to be taking in the view like most people who showed up on the promenade that early. But when Ross got closer, the man turned to face him, as if he’d anticipated his arrival. Suddenly, Ross recognized him—it was Kazem, a man he had first met two weeks ago in Las Vegas. Seeing him now surprised him. What the hell is he doing here? he thought.