HITLER ON THE COUCH: A Psychological Profile of Adolf Hitler (BBC Documentary) 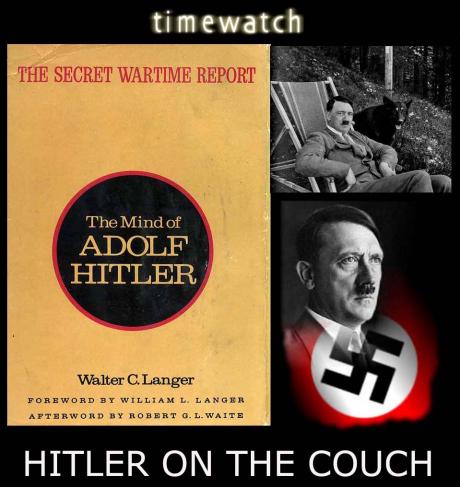 Time Watch Documentary Inside The Mind Of Adolf Hitler describes the Wartime Report commissioned by the OSS ( which later became the CIA) on the psychological profile of Adolf Hitler established by Walter C. Langer. It paved the way for a new discipline in international relations – political psychology.

Inside The Mind Of Adolf Hitler

Making ‘Inside the Mind of Adolf Hitler’ wasn’t a decision taken lightly. There’s a very vigorous debate among historians about the value of psychological analysis in contributing to the understanding of any historical event. The problem for many is that the psyche of any individual is only one factor in how history unfolds. Moreover, any psychoanalytic approach in the historical context is fraught with difficulty. The primary problem is that the psycho-historian has no direct access to the individual under examination. Therefore, that analysis is fundamentally compromised. It’s essentially second-hand …

Journalist Mike Wallace Reads Out the CIA’s Psychological of the Shah of Iran on 60 Minutes (1976/1977):

However, to deny the influence of the individual in shaping events is patently not sustainable. For example, the way that Nazi Germany was constructed and organised to some degree reflected Hitler’s personality, drives and desires. How far it was driven by the force of this unique personality is the question. The groundbreaking work of Walter C. Langer, and his team of psychologists paved the way for a new discipline in international relations – political psychology. Its most famous practitioner, Jerrold Post, who contributes to the programme, was inspired by Langer’s analysis of Hitler. In fact he still uses it as a teaching example.

Post worked for the CIA for nearly two decades and was personally cited by President Jimmy Carter as being crucial to the success of the Camp David agreement in the late 1970s. It was Post’s analysis of the two main protagonists in the Middle East, Begin and Sadat that allowed Carter to find a way to bring them together. Post now works in the area of terrorism. His insights into the minds of the bombers have made him a sought-after speaker at conferences and think tanks, and he’s also a regular guest at NATO HQ in Brussels.

More on this Documentary Here