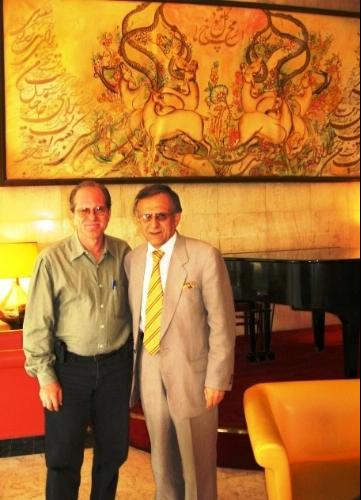 Hooshang Amirahmadi, President of AIC and me at Hotel Esteglal, Tehran summer 2008. He was there to open an American Iranian interest office, with US government approval from what I could gather. I was there for tourism and to see old friends. Notice the painting and the grand piano in the back ground, exactly as they were 30 years ago. For me it was a strange sensation to be back in the same hotel where I was taken hostage during the revolution of 1979 but I wanted to gain a sense of closure on it. Everyone was extremely polite and courteous to me especially the IT people in the communications office in the lobby and following the news closely on UN conferences about Iran and asking if there would be peace. One gentleman worked a second job at the Ministry of Culture and was asking me for tips on how to make their website more attractive for the promotion of tourism.

For me it was like visiting ghosts of the past seeing the exact same spot where I had sat with my boss to have tea or the French restaurant where my friends and I had once celebrated Norooz, whose name was changed from Chez Michelle to Nauphle Le Chateau.

Everyone kept asking me with wide eyed innocense  and hopefulness if I liked it better before or now?I told them there were good points and bad points about both eras.