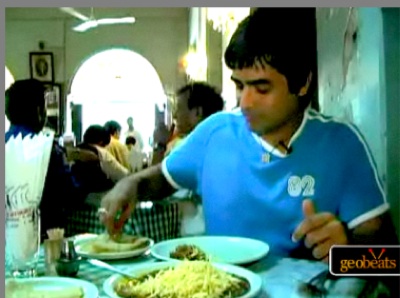 “There used to be a rooster, right here,” says Afshin Kohinoor, slapping the counter at Britannia restaurant in Mumbai. It held court there from 1982 until 1989 when it got ill. “We were going to send it to Australia for treatment but it was too late.” (Oz apparently offers the best healthcare for ailing poultry.) Today, the rooster is remembered in the much loved restaurant’s logo and in a framed photograph on the wall.

The fear among a number of Mumbaikers I’ve spoken to is that the restaurant itself will end up as a distant metmory – that Britannia may close. As 87-year-old Boman Kohinoor affectionately puts it, it’s up to those “rascals”, his sons – Afshin, 48, and Romin, 47 – to keep it open for another generation to savour.

Head chef Romin “is here at seven-thirty every morning” to oversee preparations in the kitchen, Mr Boman Kohinoor tells me, with his eight assistants. You can often see the older Mr Kohinoor with his head in his arms, in a corner, at a table, resting after the lunchtime surge.

The staff, who are attentive and friendly, weave among tables and chairs delivering plates of mutton and chicken berry pulao, topped with fried onions, cashews and barberries from Iran, to the dozens of eager palettes that fill the place, which has not been decorated since the 1940s, each day.

Then there’s the sali boti and Britannia’s squishy chapattis and Pallonji’s ginger or cherry soda and the Bombay duck (battered fish), none of which would mean a thing were it not for Britannia’s consistency.

My visits to Mumbai, nay India, tend to be centred on visits to Britannia. (If my plane from Goa arrives later than 2pm, it means waiting until 12 o’clock the next day to eat. It’s well worth not eating for three days in advance in order to stock up like a camel at Britannia.) In fact, those who come to India for spiritual experiences surviving on a plate of dal, prayers, and sweeping an ashram at the crack of dawn baffle me – the closest I have come to a spiritual experience in this great country is the explosion that occurs halfway through a plate of sali boti – diced lamb – when its spices collide with Pallonji’s ginger soda and I struggle to restrain the liquid from shooting from my nose.

Faith pulls me through and delivers me to the mutton berry pulao. Shorn of all fat it’s cooked slowly to melt at first touch. In fact, you barely need to exercise your jaws and (thus) you commune with the goat and the goat has communed with the earth and the earth spins and orbits the sun and you know in that moment that you are connected to the universe.

Since the current menu was introduced by Mr Kohinoor’s late wife, Mrs Bachan Kohinoor – an Indian Parsi who worked as a legal adviser to Iran Air – in 1982, Britannia’s menu has been pegged to “the best quality of raw materials”. “We use Lal Quilla basmati rice – the best – 115 rupees per kilo,” says the elder Mr Kohinoor. “Mutton, Rs350 per kilo; Rs200 per kilo standard Godrej chicken; ghee all by Godrej,” – apparently a fine supplier.

He opens a paper file and shows me postcards from happy customers from the UK and US and describes having asked a Texan man to deliver a simple message to George W. Bush: “No war. We want peace.” Then, he says, with genuine disappointment, “But he didn’t stop the fighting.”

Mr Kohinoor recalls attending meetings with Mahatma Gandhi at the “Mani Bhavan in Gamdevi. We’d say ‘Don’t engage with Jinnah, don’t divide India!’ and he said ‘I will – I want freedom while I am alive not when I am dead’.”

He recalls the journey of three days from Yazd to Bandar Abbas in Iran, when he was nine, from where he and his father sailed for 12 nights to Bombay, following the voyage made by his grandfather in around 1880. “My grandfather didn’t have a paise when he arrived in Bombay but the Parsis helped him.” He ran a stall near Victoria Station called Kohinoor. Then in 1923 Britannia opened in the Ballard Estate – the Empire-friendly name helped it to win its licence more quickly from the colonial authorities.

During World War II, the British took over the restaurant and handed it back to the Kohinoors in a shoddy state. It was redecorated around 1947 and Mr Kohinoor says it has barely been touched since.

One can only hope today that Britannia will continue – the decision rests with Messrs Afshin and Romin Kohinoor, who always greet this humble Britannia fan with a warm, Persian “khosh amadeed”. On my last visit there they would let me pay: “Maro khejalat meedeen.”

Gentlemen, having sacked Delhi in 1739, Iran’s Nader Shah borrowed – okay, stole – the Koh-i-Noor diamond from India. Today, in the much-loved Kohinoor family Iran has returned a set of diamonds to India. Please, in the name of the rooster and for the love of eating, keep the restaurant going and continue to make thousands of people happy. As Time Out Mumbai food editor Roshni Bajaj puts it: “Britannia is too important a place for Bombay. We can’t afford to lose it.”