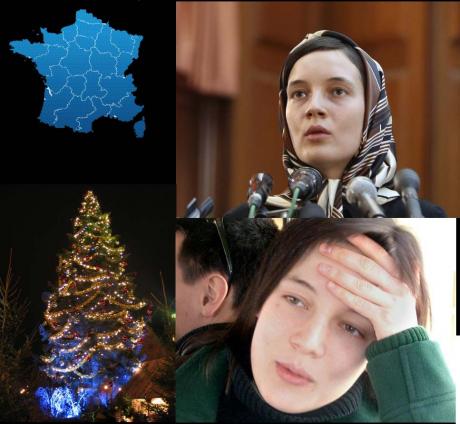 Clotilde Reiss the young French Teacher falsly accused by the Islamic Republic judiciary of espionage for Western powers has seen her liberation postponed with no logical explanation. She will be spending Christmas at the French Embassy in Tehran away from her parents and loved ones.

The Iranian regime has been demanding for an exchange in return for her liberation of  Ali Vakili Rad the assassin of Shapour Bakhtiar the Shah of Iran’s last Prime Minister and Opposition leader in exile.

Although France’s President Sarkozy as well as his Minister of Foreign Affairs Bernard Kouchner have firmly opposed any such exchange, Ali Vakili Rad who is condemned to life imprisonment has spent the last 18 years in prison ( a trial period during which a prisoner ‘s good behavior can lead to his freedom on grounds of not representing a danger for society). By January the French Judiciary will be deciding on his case. Although France’s Judiciary is said to be independant, one can imagine that Iran is actually hoping to delay Clotilde Reiss’ liberation so as to influence the decision of expelling Vakili Rad to Iran after an eventual end to his lifetime sentance.

Such an eventuality would not only consist of an insult to the memory of Shapour Bakhtiar and his family but would also be unjust towards Clotilde Reiss’ honor. It would mean that her so called “crime” ( taking photos of the protests and sharing her views on the events on twitter like millions of other Iranians during last summer’s post election protests) would be equal to that of an assassin’s cold blooded crime.

Clotilde Reisse deserves to be set free like all other Iranian protestors arrested simply because she is INNOCENT PERIOD !

Here is to You Clotilde and Your Beautiful Soul and genuine love for Iran  the language of which you speak so well and your love for Iranians,