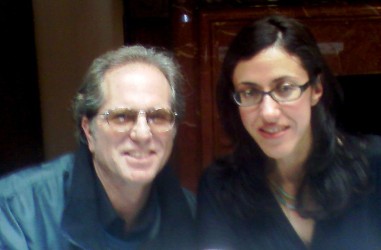 Azadeh was born in Palo Alto and grew up in San Jose. In her novel “Lipstick Jihad” she has captured the dilemma of belonging neither here nor there…of not exactly fitting in, either in the USA or in Iran…her parents and grandparents’ generation of expats coping by growing vegetable gardens and quietly living in the past and hanging out with long time family friends from the old country. She describes the same kind of alienation I experienced coming to the USA from Italy for the first time when I was 16 and not fitting into the impersonal hi tech culture based on trends and consumer spending. Her description of childhood visits to Iran and the kindness and generosity of her relatives and the wonder world that Iranian culture is, is also something to which I could relate having spent the summer of 1966 at age 16 in Iran for the first time. I went without any relatives and stayed with the family of my first Iranian friend whom I went to school with and it was an amazing experience for me. Because of the similarity of our expereinces I started corresponding with her.

She tried to live and work in Iran but found the IRI too repressive and her footsteps dogged and activities monitored  by secret police all the time. It became so inhibiting and uncomfortable that she no longer wanted to stay there either. In her next novel the “Honeymoon in Tehran” she describes life in Tehran society, wedding planning, lavish weddings, the schism between the ambitions of the youth and the islamic regime, she falls in love and marries and tries once more to integrate into life in Tehran but as the regime becomes more repressive especially against journalists and again a government agent minding her every step she decides her family’s future lies outside Iran.

Two summers ago I went back after 30 years absence because I did not want to be accused of only hanging on to my childhood memories of the romantic Iran and understanding nothing of the present. Of course the election fraud and brutal repression of the protestors was still a year away. I found the same warmth and generosity as in my childhood and in fact many of my old friends showed up some of whom I had not seen in 40 years and others in 30 years.

I managed to dance my way around the restrictions of the regime starting from the time I got to the airport and was detained in the usual way. In fact because I could speak enough Farsi, the customs officials and police and I ended up laughing and shaking hands and waving good bye to eachother…they said that Iranians are given so much trouble when they go to visit America that they had to at least detain me ten minutes to even the score. I remembered how the students from Shariff University had flown all the way from Iran to California for their annual convention with their sister Stanford University only to have their visitors’ visas revoked at the airport and being put back on the planes, some of whom had brought their small children. By contrast they didn’t even open my luggage which was full of women’s apparal for friends. However I managed to dance around the regime for only three weeks and with the protection of being a foreigner. I cannot imagine a lifetime of it.

My guide had to make a report each day for the file of where I had been each day and whom I had seen but at six o clock he dropped me at my hotel and went home and I went to see friends on my own after that. I even stayed by myself in a friend’s house in Shomal and only had to provide the guide with the information on the owner. Once when I forgot and took a photo of the Supreme Court, a soldier snuck up behind me grabbed my camera and screamed at me to relinquish it. I had taken over 400 digital photos of my trip at that point. I kept telling myself to stay cool, that this was Iran and not the USA and I could always find a way. After a few minutes I went to the guard house at the gate and asked the soldier where he had taken the camera. He said to the security office. I aske dhim if I could go talk to the security office and he said yes. So I went alone, unaccompanied through the Iranian Supreme Court to the security office where a single officer was looking at my camera. I told him it belonged to my son and that my father had been a lawyer which is why I wanted a photo of the Supreme Court. I told him I had forgotten about the restriction and that I had only taken one photo and would be happy to erase it in front of him which I did. I had my camera back one minute later. Can you imagine walking unaccompanied through the US Supreme Court after taking photos of a restricted government installation and being given your camera back without being detained and questioned?

Another time when my guide and his wife accompanied me to Shomal, when they got to their hotel, they had forgotten their wedding license. The lady owner, laughed and said to go to the police and get a letter. The police said no problem don’t bother, just tell her we said it is OK. When I stayed in Esteglal Hotel, they kept my passport until I checked out and I had to buy time cards for internet access but when I stayed in the Homa Group Hotel, they let me keep my passport and gave me a cable in my room with unlimited access. The point of all these examples is to reflect upon the kind of schizofrenia that is the current Iranian psyche. The young boys and girls would drive along one street in particular in Elahiyeh neighborhood to exchange phone numbers through rolled down windows while at stop lights and from time to time a police wagon would come roaring up the street to bust it up.

The people and the regime are out of sync. We went to a fashionable Cafe, Cafe Classic and the owner chatised my friend for showing too much hair on her forehead from under her scarf. We would go to Geylioon Cafe’s where they allowed women to smoke which was against the restrictions of the regime and everywhere I went to private homes I was offered alcohol. What I found was a pervasive sadness as the fall out from the theocratic coup d’etat has now lasted thirty years and curtailed the dreams and ambitions of two generations…people were more worried about their economic future and career ambitions in general than about their lack of political rights and freedoms. Everyone is affected by bad economy not just political activists. The sanctions also cast a gloom and a sense of isolation and alienation from the outside world which people did not want. Many people I spoke to were wondering where to emmigrate to, the USA, Europe, Canada, Australia, Malaysia? It is hard for the average American to understand the deep attachment that Iranians have for their culture and how devastating it is emotionally and psychologically to  be severed from it, despite the political freedoms offered here. I told many of the people I spoke to in Iran that our Generation X also worries about economic and career opportunity and that our economy is also in recession and the majority of us are fighting debt and struggling for economic survival.

Azadeh does an excellent job in her writing describing this frustration and complexity and cultural identity crisis  of the Iranian psyche, which pits the college educated youth against the Islamic regime. A friend of mine told me her sister was once arrested for a day for not wearing her scarf when she came out on her balcony momentarily to water her planter.You hear a thousand stories about the mindless restrictions most of which are not really imposed for religious reasons but rather to create profit opportunities through pay offs and bribes. Another family told me proudly how their family owned engineering company had rebuilt some of the institutions destroyed by the earthquake in Bam but then the government had never finished paying them for their work, not to mention that their pay master was mugged on his way to pay the employees on a regular basis. This is the same government that provided families who had lost their homes with an architect to allow them to design their own replacement homes which the government paid for. It was such a successful program that it became known as the “Bam Model” and experts from other countries which had experienced natural disasters came to study it. Always before when governments replaced destroyed homes after natural disasters, with cement block row houses, no one wanted to live in them.

People are living in constant fear of the regime in Iran, while in the USA people live in constant fear of violent crime. In Iran the jails are full of political prisoners while in the USA the jails are filled with violent criminals. In Iran a woman protestor is raped in jail by her prison guards or interogator, while in the USA there is a sexual assault somewhere every two minutes according to government data. The point is both societies have their problems and nothing is black and white. I think that Azadeh does a good job not only of describing the schizofrenia of Iran today but also the difficulty of adjusting to life in the diaspora. People come to the USA thinking that the streets are paved with gold only to find prejudice and extremely stiff competition in a world where money is the only measure of success and only “winners” are valued preferably single and between the age of 20 and 40.

The leftists are convinced that Ahmadinejad represents the working class and that the dissidents are only the elite, which I think is patently absurd when you look at the numbers of the discontent in this Green movement from all around Iran and of every economic class. Here we elect a President to stop two unwanted wars and he expands them instead and receives the Nobel Peace Prize?  It seems the whole world is suffering from governments which do not represent the will of the people.