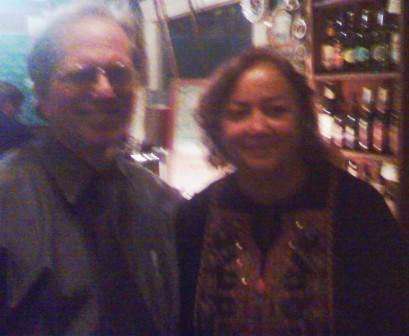 It has been my great privilege to get to know the author whose humble demeaner belies the huge intellect she possesses. A few years ago I became curious about contemporary Iranian authors and started to research them spurred on by the assertion in “Reading Lolita in Tehran” that the novel was not part of Iranian culture and that it had been adopted from foreign influence. I started to compile a list of photos of every contemporary Iranian author I could find and I am up to 223 out of over 356 authors I have identified.( The list can be found in the photo album section of my website at www.zirzameen.com)

Unfortunately few of these works have been translated into English making most of the Western world unaware of their existence. The Hooshang Golshiri Foundation in Tehran and the Translation Project of Niloofar Talebi in the USA are dedicated to translation of this great body of literature.

I am so pleased that Shirin Neshat has made Shahrnush’s novel “Women Without Men” into a film which took awards at the Venice Bienniel. Many of Shahrnush’s novels should be made into movies like” Touba and the Meaning of Night” and “Blue Reason.” The magical realism style in which the story line is embedded in a particular period in Iranian history but no line is drawn between physical and psychological reality lends itself to cinematographic and computer generated effects. I think the memoire of her experiences in Iranian prisons is also extremely relevent to the current situation in Iran.

The Dog and the Long Winter, (Sag va zemestan-e boland)
Parsipur’s first book, a novel in 350 pages, was published in 1974. Later due to the Iranian revolution its reprints were stopped. It received permission for republication in 1990 but shortly after printing, due the author’s incarceration, it was banned and all copies were seized by the Government. This book has been reprinted at least three times in the US, Sweden, Germany and Russia.

Trial Offer (Tajrobeh’ha-ye azad)
A collection of connected short stories, in 100 pages, was first published, in 1975 (Amir Kabir Publication, Tehran). This book was translated into English and published as a chapter of Stories From Iran, The Chicago Anthology, Ed. by H. Moayyed (Mage Publishers, Washington, D.C. 1991).

Prismatic Clusters (Avizeh’haaye Bolur)
A collection of short stories in 94 pages (Raz Publishers, Tehran 1977).
It has been reprinted in the US and Sweden recently. This book is translated into English. recently these
stories with other stories has been republished in Iran under the name: Garma Dar
Sale Sefr. It means: “Hotness in the Year of Zero”. this is the title of one of
the stories, and the publisher is Shirin Book, Tehran).

Tuba and the Meaning of Night (Tuba va ma’na-ye shab)
A novel in 415 pages (Alborz Publishers, Tehran 1989). Within the next six months it was reprinted twice, each time with a circulation of 22,000 copies. And later, due to the author’s incarceration by the Government, this book was reprinted three other times. Tuba’s fourth edition came out in the summer of 1994 with a circulation of 33,000 copies. Presently Tuba is also translated into German, English and Italian.

Women Without Men (Zanan-e bedun-e mardan)
This collection of short stories was first published in 1990, and sold out in less than two weeks. Soon it was banned by the Government and its second printing was never distributed. The subject matter of this book was the main reason for Parsipur’s second arrest by the Government. Later the book was reprinted twice in the US and once in Europe. Women Without Men has been translated into German, Swedish, Spanish, Italian and English.

Tea Ceremony in the Presence of the Wolf (Adab-e Sarf-e Chay Dar Huzur-e Gurg)
Parsipur’s fourth collection of short stories, in 280 pages, has only been published, in Farsi, in the United States (Tassveer Publishers, Los Angeles 1993). This book includes six of Parsipur’s essays and lectures given in her university lecture tour of 1992. This book too is translated into English.

Blue Reason (Aqle Abi)
Parsipur’s latest novel was about to be published in 1990 when she was arrested and jailed by the Government of the Islamic Republic of Iran. The book was deemed improper for publication at the time, as it still is. This book was first published in the Persian in the United States in the Summer of 1994 and later in Sweden.

The Simple and Small Adventures of Spirit of the Tree
(Majerahaye Sadeh va Kuchake Ruhe Derakht)
A novel in 215 pages (Baran Publishers, Stockholm 1999).

On the Wings of Wind (Bar Bale Bad Neshastan)
A novel in 618 pages (Baran Publishers, Stockholm 2002