Beginnings of a greater war 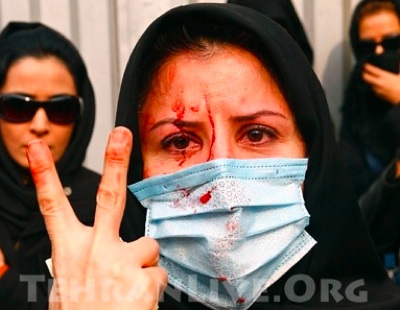 Sunday, 10:15 am…Enqelab Square,… Into the Karegar Avenue, tired and nervous.

I see a throng of security forces present in the Enqelab Sq. A view on the walkway bridge at the south of Enqelab Sq offers an intimidating view: scores of motorcyclists; units of armed police, wearing helmets and holding riot shields, crowd the square.

I pass the police, casually making my way through the crowd. Near the entrance of the University of Tehran, however, the pedestrians are stopped. “Turn back!” the baton whirling guard shouts. I move up the 16 Azar Street. Suddenly the guards storm the sidewalks. I run, along with a dozen of pedestrians. I feel one of the guards approaching me from behind. I see a baton. I run faster.

As I return to the Karegar Street, I am out of breath. I rest on a bench at a bus stop.

After the long minutes of uncertainty and fear, an anxious crowd marks a release of tension and seems to reinforce a sense of self-confidence. I begin to notice that people of all walks of life, of all backgrounds, cry out anti-government slogans.

“Death of Dictator!” “Montazeri, your path will not be forgotten!” “Hussain Hussain Ya Mir-Hussain [Mousavi]”. A group of Chadori ladies arrives. Beating their chest, they scream “Ma Ahle-Kufe Nistim, Peyro-e Yazid nistim [“We are not from the city of Kufa; we are not followers of Yazid”]. A middle age woman lies down in front of the traffic. The protesters gather around her, chanting, mocking the police. The traffic comes to a full stop.

I now could hear the thrashing of a battle raging front of my eyes. It is time. The dark riders (known as the Qods contingent) charge the protesters on sidewalks. Men and women of all ages begin to run away, though returning back immediately after the security forces drive up the Karegar Street. The motorcycle unit attacks and retrieves, a tactic used to create fear in an urban setting. During one of their attack tactics, they run after a group of protesters. Most get away, but a woman is caught by one of the guards. He punches, batons and high kicks the female protesters. She is badly beaten, down, motionless. The entire street seems to sink beneath my feet as my eyes meet the form on the pavement. I could hear myself breathing heavily. The female protester struggles to stand up, but falls again as the guard ceases to beat her with the baton, returning back to his unit. At another corner, a young man is beaten, captured and then take into a police van.

A lady in chador stands alone in the corner of the street, waving her hands into air. A guard runs to her, shouts something into her face, but she stands still, with a red face, continuing to wave her hand. There is commotion in any direction, at any corner. The situation is particularly tense near the Park-e Laleh (or Farah). This is the zone traversed by not only pedestrians, but also those who are at the park, now entering the scene by hearing the commotion.

The Keshavarz Blvd and Karegar Avenue are locked with traffic. Drivers turn off their engines. Standing near their cars, a number of taxi drivers cry out anti-government slogans, apparently with passengers showing signs of V—a symbol of victory. A man yells: “this is our new Iran and it won’t go away that easily.” When the troops finally cease their attack, many dozens of men and women, some wounded, stand in the middle of the juncture or in the surrounding area and wait for the next wave of attacks.

By noon the crisis abated and, as the anti-riot forces begin to use more violent measures to crush the demonstrators, the protesters become more belligerent. As I find a way to leave the scene in a hurry, the clashes come into full swing. Fire. Smoke. Gun shots. It is a battle that rages into the night, a battle that marks the beginnings of a greater war for the future of Iran.